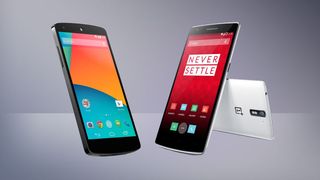 How do the two compare?

There are some seriously disruptive handsets making their way into the mobile market, and the latest phone causing a stir is the low cost, high powered OnePlus One.

We've put it head to head with the Google Nexus 5 - another handset which sports a price tag lower than its skill set - to see how the two budget-yet-brilliant phones compare.

On the surface, the OnePlus One and Google Nexus 5 are the same, both sporting the latest version of Android KitKat 4.4.2.

While the Nexus 5 sports the stock version of Android the OnePlus One actually runs CyanogenMod 11S.

This is a community driven Android interface which builds on Google's offering and adds various enhancements and additional features.

It's not a heavy skin like we see on Samsung or Sony phones, with most things still looking like stock Android.

Neither handsets are going to win any design awards, as both are relatively unassuming blocks of plastic with a large glass frontage.

There actually isn't much difference in the handset's thickness, but the tapered edges of the 8.9mm OnePlus One makes it feel thinner than the 8.6mm Nexus 5.

At 137.9 x 69.2mm the Nexus 5 is much easier to use one-handed, and you're able to reach all areas of the screen without any awkward shuffling.

The OnePlus One is a little more unnatural in the hand thanks to its larger dimensions (152.9 x 75.9mm), and you'll need to employ both hands when it comes to tapping out a message.

Over on the OnePlus One you'll find a larger 5.5-inch display which still sports the same 1080 x 1920 resolution and IPS technology, but pixel density is slightly lower at 401ppi.

That means the Nexus 5 has a slight advantage in terms of clarity, but you're unlikely to notice a huge difference in quality between the two.

When it comes to power the OnePlus One is on top with a 2.5GHz quad-core Snapdragon 801 processor, 3GB of RAM and Adreno 330 GPU which puts it on par with the likes of the Samsung Galaxy S5 and Sony Xperia Z2.

Being six months old the Nexus 5 has the older 2.3GHz quad-core Snapdragon 800 chip as well as 2GB of RAM and the same Adreno 330 GPU.

Both handsets are plenty of power under the hood, but the 801 chip in the OnePlus One provides more grunt and better power efficiency for a better overall user experience.

The Nexus 5 was widely panned when it first arrived for its sub-par snapper. Clocked at 8MP on paper it doesn't sound too bad, but in practice the pictures it produced were poor.

A software update did address some of the issues, but the camera is still one of the big weak points of the Nexus 5.

Even more recently Google has updated its camera app, adding in the "Lens Blur" feature - something which seems to be finding its way onto all the flagships in 2014.

Things look brighter on the OnePlus One with a 13MP snapper adorning the rear, just above a dual-LED flash. It also boasts Sony's Exmor sensor, so initial signs are good for the One, but you'll have to wait for a full review to find out just how well it fares.

That 13MP camera can also capture 4K video, while the front facing 5MP lens can also record at 1080p. The Nexus 5 meanwhile is stuck with a 1.3MP front camera.

The OnePlus One has a bigger screen and more power than the Nexus 5, so that must mean it commands a bigger battery too? In short, yes it does.