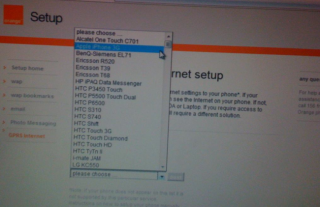 The iPhone on Orange's intranet

The long-rumbling chat that O2 is set to lose exclusivity on the iPhone has taken another turn as the iPhone 3G has turned up on Orange's intranet.

The iPhoneBlog has managed to bag a screengrab of the offending list, which does look pretty official, although as we all know, anything can be faked these days.

Phones showing up on this list has traditionally meant that the handset will be coming to the shelves in six to eight weeks, which is around the time we're expecting to hear word of the next iPhone from Steve Jobs on his return to Apple duties.

What is Orange planning?

It would therefore make sense that either: O2 is losing exclusivity on the old models as it looks to the next generation, with Orange picking up the pieces, or O2 will be losing the deal altogether.

The latter is likely only because O2 has been locking customers into 2 year iPhone deals recently, which would suggest no new device is forthcoming. But given the persistent rumours, much like last year, you'd have to think this isn't the case.

Orange currently stocks the iPhone in many other countries, so rumours have persisted that it will eventually get the handset in the UK as well, with instances like this only fanning the flames.

Either way, it's not a proper week in technology journalism without some scurrilous iPhone rumour, is it?