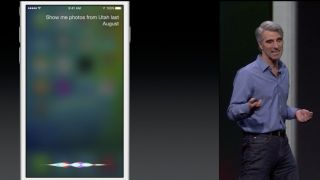 Apple introduced iOS 9 at WWDC 2015, boasting some new features and enhancements to set it apart from iOS 8.

Apple wants to bring its new iOS to more devices than ever, promising a free upgrade this fall to all the same products that support iOS 8. In addition to the expanded rollout, Apple is introducing a public beta for the first time ever, coming to users next month.

For certified developers in Apple's inner circle, the iOS 9 beta is available to tinker with today, and will open in July for all users to try.

The biggest upgrade to the mobile OS announced is Siri's new "proactive assistant" feature, which feels like Apple's answer to Google Now. Like Google Now, Siri will use more context from the page being viewed to offer handier recommendations and reminders. It also learns what time of day you are prone to open certain apps, making them more accessible to you.

A neat addition is Siri's ability to suggest names of who might be calling you when a random number pops on your phone's screen.

New productivity features are on the way to the iPad, including a Picture-in-Picture mode, Slide Over to view another app into view while you're working on something else, and Split View to run two apps side-by-side at the same time. This particular feature is only coming to the iPad Air 2.

Apple Maps is seeing an upgrade in iOS 9, too, adding transit directions to select cities in North America, Europe and Asia. Apple Pay is seeing improvements on its end: it's not only headed to the UK but also rewards and store-issued cards will be a part of the mobile wallet starting in the fall.

In iOs 9, the Passbook app will be replaced by an app called Wallet. Notes, used by over half of iOS users on a daily basis, becomes a bit more intuitive, adding to-do lists, drawing capability and easy access to pics in Photos.

Apple also introduced "News," essentially ditching Newsstand and making an app that looks a bit like Flipboard and Feedly mashed together. The demo for the app displayed notable news sources like Wired and The New York Times, but showcased them in Apple's custom design.

iOS 9 and its new features, apps and performance upgrades will be available as a free upgrade this fall.