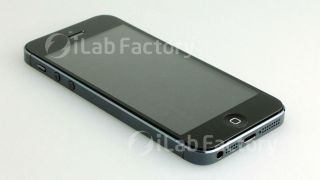 New images have made their way onto the worldwide web claiming to show the fully assembled body of the iPhone 5.

We've already seen a number of images claiming to show off parts of the next iPhone, and a video which apparently reveals the back-plate for Apple's next handset, but this is the first time we've seen all the pieces put together.

The new images come via Chinese repair shop iLab Factory, which claims to have got hold of a completed iPhone 5 case.

The handset which features in the shots sports the same stylings as we've seen in previous leaks, with the much rumoured smaller dock connector on the base of the device, flanked by speaker grilles and a 3.5mm headphone jack – which resides at the top of the iPhone 4S, 4 and 3GS.

Then of course there's the much-hyped larger screen on the front, thought to be 4-inches in size, plus the repositioned front facing camera, and round the back the images stay in line with previous rumours, with a two-tone glass and metal combo.

According to the report, the iPhone 5 will be lighter and thinner than previous models, although it's still unclear if this is indeed the final design, and we don't know where these parts were acquired - so while we aren't getting carried away just yet, this does show a much more feasible final design than before... let's get ready for the mooted September launch.