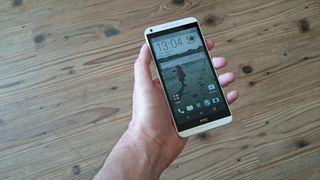 With the HTC One M8 high-end flagship launch out of the way for the year, HTC's mid-range Desire 816 flagship is finally arriving Down Under with a sub-$400 price tag and headed straight to Optus as an exclusive.

Touting a similar look to the HTC One range - but now in plastic - the Android-powered Desire 816 has a large 5.5-inch display and weighs in at 165g.

While it's definitely not a premium phone, it can certainly boast some power, with a quad-core 1.6GHz Snapdragon 400 chip and 1.5GB RAM.

If 8GB of onboard storage isn't enough for your needs, it does also have a microSD card slot. You also get NFC, DLNA connectivity, Bluetooth 4.0, Wi-Fi and, of course, 4G and LTE Cat 4.

With those specs, you'll need a decent battery to get you through the better part of the day, and thankfully HTC has thrown in a 2600mAh battery.

The Desire 816 touts a 13MP shooter on the back and a 5MP front camera, along with 1080p video recording capabilities.

HTC Boomsound is also onboard with dual-front speakers, as well as HTC BlinkFeed.

You can order the smartphone now from Optus, with an outright price of $398. It'll attract a $5 monthly repayment on the $35 My Plan, though it'll be free on all other 24-month plans.