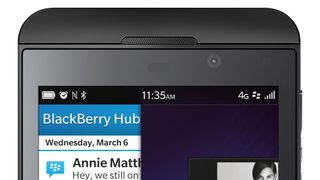 Will the Amazon app store set BlackBerry's platform on fire?

Not only is Amazon forcibly smashing its way into the smartphone market with its Fire Phone today, it's got BlackBerry singing its praises as well.

The Canadian smartphone maker has piggybacked on Amazon's coattails, announcing that its BB10 smartphones will support the Amazon App Store when BlackBerry releases its 10.3 software update in Q3 this year.

That means that BlackBerry Z10 owners will be able to download from the 240,000 Amazon App Store library.

A supplement, not a replacement

With sales of BlackBerry handsets not exactly setting the world on fire - possibly because BB10 is hard to learn - the platform is struggling to attract key apps for its customers.

With the Amazon partnership, BlackBerry has an opportunity to expand the company's software repertoire fairly simply.

In the leadup to the 10.3 update, BlackBerry and Amazon will be working with BlackBerry developers to help them migrate their apps to the Amazon App Store.

Of course, there's no guarantee this will help move BlackBerry units, although perhaps if it's coupled with some impressive new hardware, we might start to see BlackBerry return to its former glory.