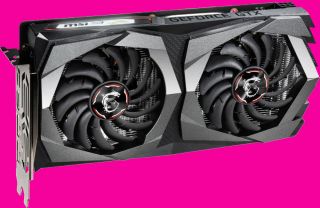 Guess what all of Nvidia's Turing graphics cards have in common? That's right, they've moved away from the dated GDDR5 VRAM. Well, except for the runts of the litter: Nvidia's GeForce GTX 1660 and GTX 1650. But, that may be about to change.

Spotted by Videocardz, a recent EEC filing lists a number of new MSI graphics cards, all variants of the GTX 1650 graphics card. And no, they aren't GTX 1650 Super cards, which we already saw get the upgrade to GDDR6 alongside the GTX 1660 Super. Instead, they're just the same old GTX 1650 graphics processors on boards that have the faster GDDR6 memory, too.

This does line up somewhat with a previously leaked benchmark for a GDDR6-packed GTX 1650 model, though those leaks were believed at the time to be for laptop graphics processors.

The lines are getting Super blurry

In one way, this move makes a lot of sense. The rest of Nvidia's Turing-based graphics processors are powered by GDDR6, so why not give the GTX 1650 and the GTX 1660 the better VRAM?

The GTX 1650 Super got a bigger boost with the GDDR6 upgrade, alongside a huge increase in CUDA cores and a bump in clockspeeds. This means an upgrade to GDDR6 for the non-Super model would start to blur the line between the two models, though not completely erase. For the GTX 1660, though, any potential upgrade to GDDR6 would completely erase the difference between Super and non-Super.

This could make Nvidia's graphics card lineup just a little bit more confusing, though will only improve the performance available to customers who want a new GTX 1650. It's also a better move than that time when the GeForce GT 1030 started shipping with DDR4 after launching with GDDR5.