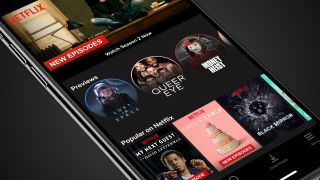 In an effort to keep up with the kids, Netflix is currently testing a new 'Extras' feed in its app that offers Instagram-style content, the service confirmed via Variety.

The Extras feature, which replaces the app's current 'Coming Soon' tab, provides trailers, image galleries and stories based around Netflix Originals which subscribers can scroll through and share with their friends via WhatsApp, Messenger, Instagram Stories and more.

“We are testing a feed of video extras in our mobile app to help fans connect more deeply with the titles they love and discover new ones to watch," said a Netflix spokesperson, further stating that, "these tests typically vary in length of time and by region, and may not become permanent.”

At present, the Extras tab is only available to a small subset of users, however, if your Netflix app has recently been updated, you may already have access to the new feature.

Appealing to a younger audience

It does seem as though Netflix has taken inspiration from these platforms as, "examples of content shared by users include images of show cast members with the type of captions you’d typically find on Instagram, including @mentions and emoji".

The use of a news feed format with shareable content will likely appeal to Netflix's young, social media-savvy audience; just under 50% of which are under 35.

Compared to Amazon Prime, which only has a third of its users in this age bracket, Netflix is clearly doing something right in the battle for young subscribers – only time will tell whether Extras will increase its percentage of subscribers under 35.

As a trial, the feature may never ever come to fruition anyway. For now, Netflix will be awaiting the results of its tests eagerly before making any commitments to Extras.