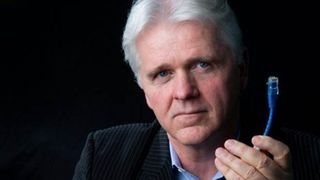 As explosive as NBN news seems to be - or perhaps less so as the majority of Australia becomes used to the realisation that the shoddy mess we’re working towards isn’t going to magically become any better – last week’s very quiet announcement that Bill Morrow was leaving barely caused a blip. It could have been possibly due to the fact NBN, obviously, didn’t make a fuss about it, or the fact that Bill didn’t even bother to set a date for departure – simply noting it would be “before the end of the year”.

Bill’s ascension to CEO, that is, the CEO of a government-owned corporation that has very little autonomy and scope from political influence, was initially hopeful as it came off the back of a successful revival of the once terminal Vodafone. Bill didn’t have the cloudy reputation of a Sol Trujillo, nor the quiet achiever status of a David Thodley. He was another American executive ready to be the face of the largest single mismanagement of public money in Australian history, in return for a multimillion-dollar pay packet.

As things go, the success or failure of his tenure is based entirely on what metrics you decide are valuable. First, the good news – he has largely watched over a reasonably successful build expansion across a wide number of contractors in every state and territory. He has largely stayed within the expected budget, sustained an exodus of internal talent and except for the poison chalice that is HFC, has managed to roll out much of the technology mix the government wanted him to. He successfully raised revenues into the billions and started the network onto an eventual run into the black.

The NBN of tomorrow has no Bill Morrow

The bad news is, well, almost everything else. NBN’s rebranding was a complete disaster – inviting ridicule from ads to trademarks – as well as stripping all useful technical information from the website, dropping APIs and creating an iron curtain around press and information requests. Gone are the public servants happy to provide information on the state of a public asset and in its place sit a team of PR soldiers determined to block, weave and form reply to legitimate requests for clarification or customer concerns.

Then the customer complaints skyrocketed, thanks to the constant deflection of CVC costs and the relentless trudge towards FTTN and HFC, even as dozens of issues began to eventuate after years of proclamations from the tech media that they would. Optus’s garbage network was, as expected… garbage. Telstra’s original HFC footprint was cherrypicked for cost and expanding it was significantly higher than expected. The true reality of FTTN speeds were biting as people realised this is what they would be stuck with for at least half a decade or more.

After being presented with a way to both save face and restore some element of value to the network, via FTTC, Morrow ignored committee recommendations to replace FTTN with it. He continued to tow the party line that FTTN was fine and that there was nothing to see here, blaming everyone from Internet Australia to the tech media for consistently telling the truth. Eventually, HFC finally fell on its own sword, with the rollout “paused” while NBN quietly moved the harder, more expensive installs to FTTC, while frantically spending big on fixing stalled connections and its DOCSIS software hack, which allowed a choice of provider over a connection not designed to do so.

The biggest difference here, however, from a company like Vodafone where Bill had complete control over project direction, tools, and budgets is that all these elements must pass through the government first. Regardless of whether Bill thought that FTTN should be ditched or that he knew the HFC system would be a disaster is irrelevant – the job is a guaranteed poison chalice. Bill modified NBN from a standard stodgy public offshoot into a slick, commercial-looking entity because that’s what he’s good at. He’s good at deflecting criticism and focusing attention elsewhere – essentially blocking access to information for as long as humanly possible, until the rollout ends, the government flips, or his tenure ends.

The man of constant Morrow

Morrow can see the writing on the wall like most of us – if Labor wins the next election they will almost certainly start a host of investigations and fact-finding missions, as well as a general overhaul of how NBN Co is set up, run, and managed. FTTN will almost certainly be replaced with FTTC going forward and much of the mix will likely condense into FTTC/HFC with a gradual upgrade to FTTC for those poor bastards currently stuck on it right now. Morrow would be rung like a sponge in front of these committees (and probably still will anyway). He would be pressured to quit, and this is just a good way to save face.

The situation now can only get even muddier as NBN Co starts the long search for a CEO willing to take on such an awful position. The piecemeal changes to technologies and rollouts, hints at 5G networks and such have completely blown out the strategies listed in the last Corporate plan, on top of the complete lack of budgeting and foresight for post-2020 upgrades and speed parity for customers who will be left behind. There is also no long-term strategy for sorting out CVC, network debt, speeds above 100mbps, effectively dealing with complaints, and producing more transparency over the status and structure of the network.

There’s also the likelihood of NBN taking on an enforcer style CEO, one who will harden, rather than soften, NBN Co’s hard edge towards taxpayers and the press, drilling down on the current plan to complete the network at any cost, regardless of a quality outcome for its stakeholders.

In which case, Bill Morrow will have certainly have left a pretty solid legacy of failure.