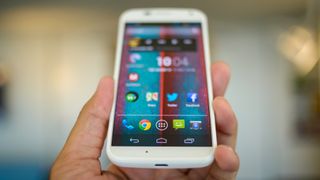 Motorola's been out of the tablet game for a few years now, but according to a new report the Illinois-based company might be preparing a new contender.

According to Engadget, Motorola CEO Dennis Woodside hinted during an interview at the company's Fort Worth facility that the company is working on tablets.

"That's something we are working on, but [there's] nothing specific to talk about right now," Woodside said.

That's pretty thin, but it's all we've got.

Engadget proposed that whatever new tablets Motorola announces might be offered through its Moto Maker application.

The Moto Maker allows buyers of the Moto X on AT&T's network to customize the phone with a variety of options, and it stands to reason that a Motorola tablet would benefit from the same perks.

That's pure speculation, however, as there have been no official hints to that effect.

The Moto X is available through a variety of carriers, but currently only AT&T customers have access to the Moto Maker.

It's also worth mentioning that Woodside said the company will look into other form factors that take design cues and technologies from the Moto X phone.

The Xoom and Xoom 2 both dropped in 2011, but a trademark dispute put the line on hold and this year Motorola finally put it to bed for good.

With the Motorola betting on the flagship Moto X to resuscitate its mobile business, a similar tablet could soon follow.