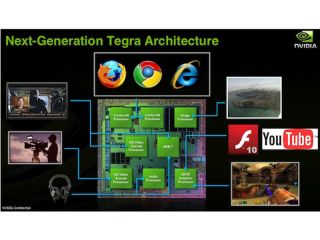 Nvidia is ready to push mobile computing to the limit

Nvidia has announced Tegra 2 – the next generation of its ARM-designed platform, and the chip can cope with Windows CE, Android, Windows Mobile and possibly even Chrome OS.

According to the graphics giants Tegra 2 is a 40nm chip, that's lower power than Intel's Atom and, apparently, Qualcomm's snapdragon.

The next generation Tegra has the world's first dual-core ARM Cortex A9 CPU running up to 1GHz and eight independent processors to handle web browsing, HD video encode and decode and mobile 3D gaming

According to Nvidia's release, it's ten times faster than the processors used in smartphones today, and up to four times the performance of the previous generation Tegra processor with advanced TSMC 40nm process with active power management.

Nvidia suggests that partners will be unveiling five to ten inch Tegra powered tablets at this CES, although there will no doubt be a delay until the first kit is available.

And Nvidia is backing tablets rather than folding devices, because it believes that people expetc a Windows PC when they see a clamshell.

"A year ago there was a lot of talk about clamshell devices," said Nvidia's Mike Rayfield told Cnet.

"The tablet is a good entree from a (telecommunication) carriers standpoint. It would avoid confusion of people getting clamshells and assuming they're getting a Windows PC."

"Tegra 2 is in production. Hundreds of development systems out in the wild. You'll see devices with Tegra 2 in the marketplace in 2010," he added.

"The GPU (graphics processing unit) is used extensively in flash acceleration. We believe that will be a significant differentiator."

"Consumers can now get the tablet experience they've always dreamed of and they can leave the power cord at home. Only NVIDIA Tegra can make this happen. We're driving tomorrow's tablets today." said Michael Rayfield, General Manager of the Mobile business, Nvidia.