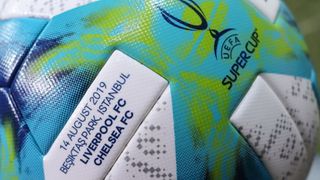 Champions League winners against Europa League champs - the UEFA Super Cup has become the traditional curtain raiser for European competitions. This year's is a first - an all-English affair, with Liverpool taking on Chelsea. Which Premier League side will earn the bragging rights in Istanbul? You watch all the action no matter where you are in the world by following our Liverpool vs Chelsea UEFA Super Cup live stream guide below.

Tonight's match highlights something of a sea change in European football, with the balance of power perhaps slipping away from La Liga - no Spanish team will contest the Super Cup for only the second time since 2008 (Atletico Madrid are the reigning champions after beating Real in Tallinn last season).

Liverpool vs Chelsea: where and when

Kick-off is at 10pm local time which is an 8pm BST start for fans tuning in from the UK.

This encounter brings together two teams from the same nation who have played each other an unusually frequent number of times on the European stage, with the Wednesday's Super Cup showdown the 11th meeting in UEFA competitions since 2005. Liverpool have notched up two wins in that time, while Chelsea edge it with three wins, the remaining five games having been stalemates.

On early season Premier League form, Liverpool go into today's clash the clear favourites with Frank Lampard's Chelsea coming into the game off the back of a demoralising 4-0 defeat against Manchester United. Liverpool meanwhile earned a convincing 4-1 win over Norwich in their opening Premier League fixture.

The 2019 UEFA Super Cup poised to be a fascinating one-off game, so make sure you follow the instructions below for how to live stream Liverpool vs Chelsea from wherever you are in the world.

Use a VPN to watch Super Cup football outside your country

If you're away from your country but are desperate to get around geo-blocking from your home broadcaster, don't sweat. Thanks to the tools provided to you by a VPN service, you can tune in no matter where you are in the world. And best of all, it's really easy to do.

A VPN is perfect for this as it allows you to change your IP address so you appear to be in a completely different location. Change it to a server back in your home country and watch online as if you were back on your sofa. We've tested hundreds of VPNs and can recommend Express VPN (comes with a 30 day money back guarantee) as the #1 rated best VPN in the world right now.

You can watch on many devices at once including Smart TVs, Fire TV Stick, PC, Mac, iPhone, Android phone, iPads, tablets etc. Check out Express VPN and claim 3 months FREE with an annual plan.

Stream Liverpool vs Chelsea live in the UK

Subscription channel BT Sport has exclusive rights to show the UEFA Super Cup in the UK, with coverage starting at 7pm on BT Sports 2.

If you're looking to stream the game, the BT Sport app or BTSport.com is where you need to go, enabling mobile, tablet and PC viewing.

There's a number of different options for watching tonight's game in the States.

Univision and TNT have the rights to show tonight's match between the two English teams via cable or satellite.

TNT will also be streaming the game via online partner B/R Live. You'll need to fork out for their $9.99 B/R Live Pass , but this will give you a month's complete access to all the Bleacher Report content, including their coverage of UEFA Champions League, UEFA Europa League, UEFA Youth League, Belgian Pro League, BVB World and the SPL.

You can tune in via the B/R Live app available on iTunes or Google Play, or watch via Apple TV, Roku, and Amazon Fire TV.

Hispanic channel Univision coverage can also be streamed via the Univision Deportes’ App and univisiondeportes.com if you want to watch on a mobile, tablet or PC.

Finally, FuboTV will also be showing a live stream of the match. It's offering a one-month free trial for new subscribers which means you can watch the UEFA Super Cup for free.

Sports streaming newcomers DAZN have something of a monopoly in Canada this year in terms of coverage of UEFA's competitions.

DAZN packages come in at $20 per month or $150 per year in Canada, though you do have the option of a one month free trial.

In Australia, Optus Sport has the the rights to tonight's UEFA Super Cup game. Football fans down under will probably be used to the early morning kick-offs in the competition – this one is at 5am on Thursday morning.

Optus coverage can be streamed via mobile and tablet with the channel's app, while chord-cutters can also access the service on Fetch TV, Chromecast or Apple TV.

If you're outside Australia and want to tune in to your Optus Sport account, you can use one of our favorite VPNs above to bypass geo-blockers.

How to watch Champions League football in New Zealand

Today's game will be shown in New Zealand via SKY Sports with kick-off at 7am Auckland time.

Subscriptions to SKY Sports cost $29.90 per month. For mobile streaming, users can tune in via the SKY Go app.

How to live stream the UEFA Champions League football in India

In India, Sony Pictures Networks (SPN) have the rights to show tonight's game. Sony Six is the channel to head to, with kick-off at 12.30am New Delhi time.

SPN's coverage stretches across both TV and it's over-the-top service SonyLIV.