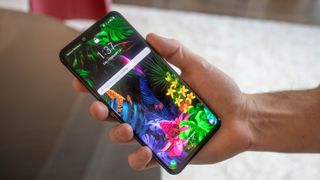 Recently we heard rumors that a phone dubbed the LG G8X would be announced in September, likely at IFA 2019, and while not much was known about the handset, we may now have seen it in the form of leaked renders.

Shared by Pricebaba and OnLeaks (a reputable leaker), the renders show a phone with a tiny 'teardrop' notch, which is substantially smaller than the full-size notch on the LG G8 – the phone the G8X thought to be a successor to, or an upgraded version of.

Otherwise the design is somewhat similar, with a seemingly glass back, a metal frame, a dual-lens rear camera, a 3.5mm headphone port, and a chin below the screen. However, there are two key differences.

The first difference is that there’s no visible fingerprint scanner here, and with there seemingly not being enough space in the notch for a decent facial recognition system, it’s likely that the LG G8X has an in-screen fingerprint scanner. That’s a feature that is starting to become common on flagships, but which LG hasn’t implemented yet.

The second major difference is the presence of an earpiece, which suggests LG has ditched its hole-less Crystal Sound tech from the LG G8, which used vibrations to produce sound through the screen. This is slightly disappointing if true, as while that feature might sound like a bit of a gimmick, we found that it worked well.

There’s no news on specs, but LG itself has teased a dual-screen phone, which could well be this. Don’t get too excited though – rather than being a true folding phone it’s likely to use the LG DualScreen accessory as an optional second display. We should know for sure soon.