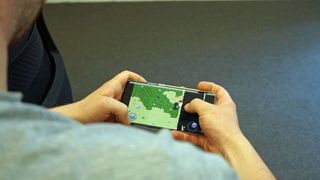 We still don’t know exactly what to expect when 5G arrives – we know it will provide quicker and more reliable connection to the internet, but we still don’t know how this will affect the way we game or stream media on our phones.

Network providers in countries around the world have launched, or are preparing to launch, 5G networks, and companies like Samsung, Motorola and Oppo have already released compatible phones, so the 5G future we’re anticipating is visible on the horizon.

This 5G infrastructure isn’t exactly widespread yet, so to see how 5G might change our mobile gaming habits we took a look at Hatch, a cloud gaming app that’s already out, ready for when all our phones are 5G-enabled.

Since 5G isn’t available yet in most places we used the app over Wi-Fi and 4G, to get a feel for how the app runs on a fast (ish) connection, as well as what it feels like to stream games on the go.

Gaming on the go

When we loaded up Hatch we were greeted by a home page full of various games, a lot like the Play Store or the App Store, except when we selected a game we could jump straight in (after a short load) – we didn’t have to wait for the game to download.

We could also jump between games whenever we wanted, and the fact we had all these games at our disposal made the option to change games when we were getting tired of one (or were performing terribly at Angry Birds again) a lot more tempting – it was easy to play a few minutes of different games in one session.

Hatch recommends certain games, both in terms of traditional app stores ‘Editor’s Picks’ and also through an option on the home page that lets you choose a genre and have Hatch load up a random game that fits the brief. When we chose this we were dropped into a game, usually one that we hadn’t heard of before, and it helped us discover some gems we would never have thought of downloading.

The games on Hatch are all ‘traditional’ mobile games like Angry Birds, Hitman Go and Monument Valley, as opposed to similar cloud streaming service Google Stadia, which aims to offer blockbuster titles. Joseph Knowles, director of communications at Hatch, told TechRadar “touchscreen games that are designed for mobile will always have a natural edge over games that are not designed for mobile”, and so the app won’t feel much competition from other cloud gaming services.

Despite Hatch’s website saying otherwise, there are ads on the app, but it’s free to download and play games, so most users will probably feel that ads are a small price to pay. A larger price we paid was for the connection, as gaming when out and about while on 4G did eat up quite a bit of data, and meant slower load times.

What Hatch tells us about 5G gaming

The big draw to cloud gaming with 5G is that you won’t need to download games, which has two benefits: it saves space on your phone, so devices with plenty of storage like the pricey 1TB Samsung Galaxy S10 Plus won’t be necessary for having loads of games; and it means you can play new games on impulse, without having to spend ages downloading something only to realise you don’t enjoy it.

This will open up the mobile games market – instead of players only downloading games that sit at the top of download lists, they’ll be more likely to try something new, especially if an app like Hatch can introduce them to a random game when they ask. Smaller developers, then, will have a much easier way of getting their games out to a wider audiences.

Knowles described cloud gaming’s unique edge as “lowering consumers’ barrier to entry and dramatically growing the addressable market for games”, so people who aren’t typically mobile gamers could get drawn in by the ease of access. You won’t need a processing-powerhouse gaming phone like the Black Shark 2 either, which again lowers the barriers to entry.

What do we want to know about 5G?

The main question Hatch leaves us asking is how much 5G will cost consumers – if people are using lots of their data for cloud gaming and other similar tasks it could end up costing a lot, depending on how much 5G contracts cost. Hatch, and online games we’ve played, can often eat through data, and we’re expecting 5G will cost a little more than 4G, so playing games on the go could see you racking up a sizeable bill.

When we asked EE how much the UK’s 5G network would cost it told us it was still finalizing its pricing plans, but Marc Allera, CEO of BT’s consumer brands, said in an interview it would be “a bit like 4G [...] a few pounds more than 3G”.

While several other network providers have pledged that 5G will cost the same as 4G, we’re also expecting most people on 5G will use a lot more data thanks to the ease of use the connectivity provides, so we’re not sure how much extra 5G will end up costing.

We asked Knowles about how people access Hatch, and he told us the app is used in different ways in different markets – so while players in the UK tended to stick to Wi-Fi, people in countries with affordable data plans, like Finland, were much more likely to use data to play games. It seems that 5G gaming’s popularity could be dependant on its affordability, as people aren’t going to be likely to stream games if it’ll cost them a fortune.

We’re also intrigued to see what 5G and cloud gaming mean for smartphone hardware – newer phones push the envelope with increasingly fast chipsets and ever more storage, but neither will be as crucial for apps like Hatch in which the game is processed online, as they are currently for gaming. Instead, more reliable network connectivity and better-looking displays will become more important in a handset for cloud gamers.

The Samsung Galaxy S10 5G has a pretty impressive chipset and quite a bit of internal memory at 256GB or 512GB, but we could see the hypothetical Samsung Galaxy S11 5G (or whatever it’s called) prioritize features like screen technology or sound quality over improvements to the memory and processor.

The benefits of 5G won’t be apparent straight away, and it’ll take a few years for phone manufacturers and app developers to figure out how to make the most of the reliable and near-instantaneous connectivity it should be provide – but Hatch gives us an insight in to what 5G means for mobile games and cloud gaming.