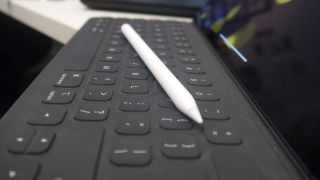 Most of the leaks and rumors surrounding the new iPhone point to it being a rather similar device to the iPhone XS, with perhaps a new camera array and a slight performance boost, but a new report points to one huge new feature the upcoming handset could have – support for the Apple Pencil.

According to an insider analyst report, shared to Business Insider by Citi Research, a big new feature for Apple's 2019 iPhones is that they'll work with Apple Pencils. Most of Citi's predictions line up to what we've heard many times before, but this rumor is a brand new one.

When we say this is a "brand new rumor" we mean we haven't heard it said about the iPhone 11 before, but the functionality was previously rumored for the iPhone XS in 2018. However back in 2017 we heard the 2019 iPhones could have stylus support, which lends credence to this new rumor.

The Apple Pencil is a stylus launched in 2015 that works alongside iPads such as the iPad Pro range, allowing you to draw, take notes or effortlessly scroll through tabs and apps.

The second generation Pencil (yes, it's had an upgrade since its initial launch) charges wirelessly by connecting it magnetically to an iPad, and it's a useful tool for people who use their iPad a lot (if you can stomach its $129 / £119 / AU$199 asking price).

The second generation Pencil is 166mm long, but the iPhone XS Max (currently the largest iPhone on offer) is 157.5mm in length - and we don't expect the new iPhone to exceed this.

Therefore it's possible that Apple will release a new, smaller version of the Apple Pencil, in the same way Samsung has a larger S Pen for the Tab S range of tablets and a smaller one for the Galaxy Note phones.

We'll know for sure in early September, as that's when we're expecting the new range of iPhones to launch, so stay tuned to TechRadar to see if this novel rumor turns out to be true.