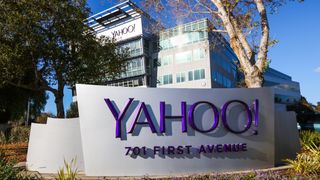 In 2016, nostalgia is big business. Millions of people have been queuing up to see Ghostbusters, while Pokémon is back with such a vengeance it appears to be transforming society as we know it.

But it is US mobile giant Verizon that has upstaged us all.

No, it hasn't been up to the attic to find its collection of Beanie Babies or a Panini Euro 96 sticker album - it has instead spent $4.8bn buying doyen of 1990s internet: Yahoo.

Founded in 1995, Yahoo quickly became the starting page for a generation of internet users in an era before Google. It was a portal, with search behaving more like the Dewey Decimal System in a library than as the algorithm-powered behemoth that we think of today.

And the company expanded, offering a wide range of services including email, message boards and even the ability to build your own websites. In 1999, Yahoo acquired Geocities, which enabled anyone with no sense of taste or design to create violently ugly webpages - no coding skills required.

But then Google happened, and poor Yahoo was never quite the same. The problem was that Google's superior search powers essentially destroyed Yahoo's core business - to the point where in 2000, the company actually licensed Google to provide the search engine on the Yahoo homepage.

"Yahoo!" was probably the last thing that investors wanted to shout when they got their quarterly earnings report.

So how has Yahoo stayed afloat? It appears that largely this can be attributed to its success in China and Japan. In 1996, the company launched a joint venture with Japanese firm Softbank (yep, the company that recently bought ARM in the UK). This was wildly successful - and is still the most popular website in Japan.

In 2005, the company invested $1bn into Chinese retailer Alibaba. While the company has no presence in the west it is in fact the world's largest retailer (yes, even bigger than Amazon) - it offers Chinese consumers a service that combines the functions of Amazon, eBay and Paypal.

Earlier this year it was revealed that, effectively, Yahoo's core business (the thing it is selling today) is worthless - and the only reason that investors kept their money in the company was because of Yahoo's stake in China.

With the sale to Verizon, the company we currently know as Yahoo will effectively become a holding company - an empty shell - through which investors will hold their share of both Yahoo Japan and Alibaba.

You have to feel sorry for Yahoo though. It isn't like the company hasn't been trying.

Like many of its competitors, over the last 22 years Yahoo has continued to hoover up smaller technology firms and invest in new ideas in search of smarter technologies and a runaway hit. And to be fair to Yahoo, it has had lots of interesting ideas.

For example, back in 2008 when phones were only just starting to get smart, Yahoo engineers came up with a service called FireEagle, which would share your location data with all of the web services you use - so they'd always know where you are.

In the pre-app era, it invented a Facebook desktop app called "Friends on Fire", which used the Fire Eagle service for location sharing with friends. Unlucky for Yahoo, this emerged just as mobile apps became a thing - negating the need for such a service as we all suddenly had GPS in our pockets.

Similarly, Yahoo Pipes was an innovative solution to a potentially tricky technical problem. Around the same time that RSS feeds were a popular way of sharing content, Pipes would let users manipulate feeds using a number of visual tools, with no need to code.

For example, you could take an RSS news feed and have Pipes remove any items that were not about, say, little known Senator Barack Obama (whatever happened to him?) - so you'd have a customised feed. Again, unfortunately for Yahoo this was just as Twitter was taking off, providing a much easier way to track websites than messing with RSS.

These are just two examples of many of bets that Yahoo has made, which in the end haven't paid off.

In terms of bigger acquisitions things are a little better. In 2005 Yahoo bought photo sharing site Flickr for just $35m - and it is still going strong today. And in 2013 the company bought itself some social media cred by picking up Tumblr for a significantly more pricey $1.1bn.

The latter purchase was a year into the tenure of current CEO Marissa Meyer, a former Google executive who was hired to turn the company around. Despite her hard work, the only real noticeable change other than the Tumblr purchase appears to be a logo that infuriates typography nerds.

But until now, everything else has continued chugging along - including Mail, Yahoo News and various other services. In fact, for all its troubles according to ranking site Alexa, Yahoo is still the 5th most highly visited site worldwide.

Given this, it is an obvious question: Why did Verizon decide to buy Yahoo? What does Verizon want to do with a company that appears to be past its best? From Verizon's perspective, Yahoo starts to look a whole lot tastier.

Verizon is a telecoms company. It sells mobile connectivity and fixed line connections - but these are effectively dumb pipes.

The fight over net neutrality notwithstanding, once you have a Verizon internet connection, despite all of the money changing hands to show you adverts or sell you stuff, it doesn't get a share. If it only relies on your broadband subscription, then there is a limit to how much Verizon can earn. And this is why it has been investing in content.

Last year Verizon bought another stalwart of the web's stoneage: AOL, for $4.4bn. AOL has long ceased to be an ISP - instead, it is a content company that has the likes of the Huffington Post and TechCrunch under its umbrella. Heck, it has even produced full TV shows for online.

So combine this with what Yahoo has to offer and suddenly Verizon has a tasty piece of web real estate, with all of the eyeballs that implies. And the combined company should prove attractive for advertisers too.

While together the two companies still only control a small proportion of the online advertising market compared to Google and Facebook, together they will make it easier for people who want to sell you things, because they will be able to offer greater scalability to advertisers. Which means more money for Verizon.

Since the acquisition was announced there has also been speculation that the underlying technologies driving the advertising in both companies could also be combined to create more sophisticated tools. This could mean adverts are better targeted thanks to a richer pool of data - and will result in a higher click-through rate. Which are exactly the things that advertisers want.

It seems likely that the Yahoo name will continue to live on. The brand is surely too valuable just to throw away.

But it is the end of an era as the company that provided a portal to the digital age for a generation of internet users is no more. One day historians might look back and search for an explanation of how it all went wrong - but they'll probably use Google to do it, instead of Yahoo.