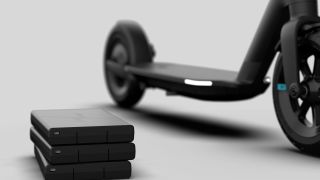 Scooters have been around for ages but, a bit like cars, they’re going electric and California-based Inboard Technology is bringing what it thinks is the world’s most advanced electric scooter to the party. Inboard has been designing and building skateboards and scooters for a couple of years, so it’s already well established in the one-time niche two-wheeled marketplace. Now though, with its Glider Electric Scooter, the Santa Cruz company wants to revolutionize the way all of us get from A to B.

The Glider certainly isn’t a kids’ toy, and it comes with a specification that’ll have technology fans drooling with excitement. In fact, after securing $8 million in funding, Inboard reckons it could be the biggest scooter release ever seen. It’s certainly got plenty going for it. There’s a swappable battery, regenerative braking, beefy tyres and running LED lights. Safety, reliability and ease of use were all at the core of putting this project together and, judging from the end result, Inboard looks like it's been successful.

Inboard Technology was founded back in April 2014 by entrepreneur and kiteboarder Ryan Evans, along with aerospace engineer and kiteboarder Theo Cerboneschi, and from day one its mission has always been to provide a greener solution to the universal problem of urban commuting. Its flagship product, the M1 Electric Skateboard, was released a couple of years ago and was the most advanced e-board deck ever. It featured integrated electronics, a swappable battery and dual in-wheel motors.

“We are always thinking of innovative ways to alleviate congestion in cities,” says Erik Joule, general manager of Inboard, homing in on the company ethos. “As some of us live in LA we have been right at the epicenter of the movement and have been inspired by the inventiveness of individuals to find a way around the traffic. Scooters started to become pervasive on the streets and we were intrigued and did a lot of consumer empathy work to truly understand the viability of the form factor.”

“In the end,” adds Joule, “the scooter has a wide appeal and a fast growing adoption rate. So for us it was a natural progression. We found, through putting the consumer at the center of our work and approach, that safety, ease of use and reliability were three things that consumers demanded. We built the Glider with these in things in mind.”

Good things take time, however, and Inboard had a lot of ground to cover in terms of product development. The company had its roots in e-skateboarding and shifting the mindset towards scooters has, reckons Joule, been a real journey.

“We are set to be part of the solution in making our cities more sustainable and connected,” he says. “Hardware is not agile and moving fast has been a challenge with a small team.” Nevertheless, the plan is to sell the same model internationally and the company will be deploy geo fencing via the app to enable them to respect localized speed limits.

Luckily, Inboard doesn’t seem to have had too much in the way of legislation to navigate along the way either, because the Glider is being targeted for private use. “We are of course ensuring that our vehicles pass all US, Asian and European standards for ease of use,” notes Joule.

At the same time, the innovative edge of the Glider is clear to see. There’s a lower centre of gravity for a more stable and safer ride with a wider deck that’ll reassure novice users. Similarly, those wider tyres enable the Glider to easily ride over rough roads and avoid sudden stopping or falling.

The innovation doesn’t stop there however. Take the Glider for a spin and you’ll find it has that regenerative braking as pioneered on the M1 model and, for maximum visibility, there are those LED headlights and taillights. Best of all though is the swappable battery pack, which offers up the potential for endless range. Meanwhile, the design also incorporates a fully integrated hub motor, hinged arm suspension for ultimate comfort and a foldable design for convenience. There’s a paired app too, that allows you to activate it, locate it and lock the thing up as well.

This powerful app will also let owners review diagnostics, battery life and more besides. ”The Glider is the confluence of hardware mastery, software expertise, and our never-ending ambition to provide smarter urban transportation,” says Joule in bold terms. “It’s the most innovative scooter on the market - designed with intention, engineered from scratch. Above all we wanted to provide a very deep app experience along with lots of social features, which is sure to set us apart.”

Inboard has big plans when it comes to expanding its market potential with an idea that could prove very popular with commuters. It’s a concept that they think will take on the scooter sharing/rental market by offering a neat new twist. “The Glider scooter is remarkably cost effective in comparison to the rentable models,” adds Joule. “A typical person commuting only ten minutes each way will ultimately spend more on the rentables within a one-year span. This will only continue to improve in time as companies like Lime and Bird in the USA continue to increase their fees and rates.”

As such, Inboard says it is committed to making cities more sustainable by reducing the usage of cars. “As a result we will be offering both consumer and fleet options for companies and cities,” says Joule. “Recently, Inboard partnered with Boxcar and the city of Madison, NJ to provide scooters for residents that live within 2.5 miles of train stations. Inboard is also in talks with businesses and organizations to provide scooters for cities and campuses, offering a unique and environmentally-friendly way for individuals to get around. This is a beta test between the two companies and if it works we will provide them with scooters.”

A future outside cars

Inboard also sees its current plan and expanding product range as just one part of a longer game. “We envision a world that does not revolve around cars,” says Joule of the future. “We’re committed to making our cities more sustainable and connected by providing a suite of short-range electric vehicles to offer a zero-emission solution in order to alleviate congestion and pollution. E-boards and e-scooters are both viable solutions, and we plan on leveraging both to make the most of our opportunity and expand the e-transportation movement as a whole.”

Based on that outlook it seems entirely possible that one day we might all either own or be sharing an e-scooter. It’s something that Joule thinks is more likely to happen than not. “Either a scooter or another electric rideable,” he suggests.

“Our primary mission is to alleviate congestion and pollution within our cities, and both e-boards and e-scooters are effective means of doing so. As cities continue to grow and change, we have to reevaluate how we move around them. Portable electric rideables are a viable and effective way to move through cities, and they’re also just a fun way to explore.”

“We think this is just the beginning of a much bigger trend,” he notes. “We believe the future of cities will be several forms of transport depending on the end use, ranging from cars to metro systems and through to small electric vehicles.”