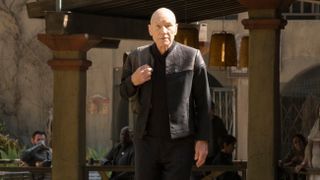 And so far, he has delivered upon his promise - episode four was set at the end of the 24th century, with a very candid perspective on Jean-Luc Picard's reaction to the loss of Lieutenant Commander Data and the destruction of Romulus.

Although, it was episode five that left us on a cliff-hanger as just before the episode ends, a mystery craft which was being piloted by none other than Star Trek's Voyager's former Borg, Seven of Nine, swoops in.

Ready for the next episode and to 'make it so'? Keep reading to find out how to watch Star Trek: Picard online wherever you are.