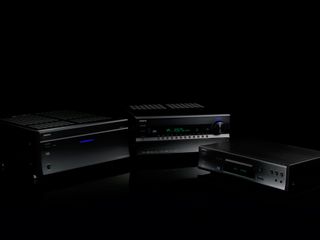 Onkyo has announced that the arrival of its latest high-end Blu-ray player – the BD-SP807.

Packing a massive audio punch, the Blu-ray setup has been THX-certified and brings, according to Onkyo, a bit of 'cinematic excellence' to the home.

Considering Onkyo only announced its first Blu-ray player last November, the company is certainly looking at nailing the high end of the market with the BD-SP807.

To keep it up to date as possible the player is Profile 2.0, so BD-Live compatibility is a-go, and there's also an SD card slot for direct access to your camera's pictures and movies. There's no news of a USB port, however.

If you fancy completing your Blu-ray setup then the company has also announced the PA-MC5500 THX Ultra 2-certified 9-channel amplifier.

Weighing a back-breaking 26KG, the PA-MC5500 is festooned with gold-plated XLR and brass RCA connections, with each channel packing a mighty 200W.

If that's not enough to melt your ears, there's a whole host of tech on-board to make sure circuit noise and feedback is kept to an absolute minimum.

It may not be digital-ready, but as Onkyo reassures us: "We opted to eschew digital power amplification for an all-analogue configuration in the PA-MC5500, specifically because it wanted to achieve a full-bodied and audibly musical sound quality, something that's still far from a given in the home cinema world."

So there you go.

Onkyo is hoping that you partner the PA-MC5500 and BD-SP807 Blu-ray player with its networked pre-amp, the PR-SC5507, which was launched back in August.

Prices are still to be confirmed but the Blu-ray player BD-SP807 Blu-ray player and PA-MC5500 9-channel amp have a release date of February and March respectively.

Go to http://www.eu.onkyo.com/ for more details.