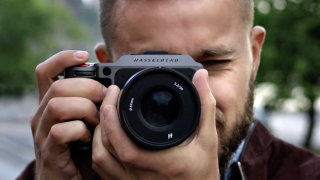 Following a fake leak and a teaser campaign that showed off a few curves and details, Hasselblad has confirmed the Hasselblad X1D II 50C.

The X1D II 50C is a medium format mirrorless camera with a 50MP CMOS sensor at its heart, which promises images with 14 stops of dynamic range.

It arrives as an evolution of the first model in the series, the X1D-50c, which was announced back in 2016. That camera remains the only other model in the line.

Key upgrades over the previous model are a new 3.6-inch LCD screen with a 2.36 million-dot resolution, as well as a 3.69 million-dot OLED electronic viewfinder with a 0.87x magnification.

There's also a new processing engine that's said to both reduce start-up time by 46% and shorten shutter lag compared to the original X1D-50c, while also boosting burst speeds to 2.7fps and giving the viewfinder an increased refresh rate.

Hasselblad has also revised the body design for better handling, and has made adjustments to the user interface for better operation.

Other features include a 3400mAh battery which can be charged through the USB Type-C port around the side of the camera, and Wi-Fi and GPS.

The new camera arrives alongside the XCD 3.5-4.5 / 35-75 lens, a 35-75mm optic designed for various applications. Hasselblad isn't shy about its capabilities, stating in its press release that it "really is the best lens Hasselblad has developed", with its optical quality said to be on a par with prime lenses in the XCD line.

The original X1D was lauded at the time of its release for offering a medium format sensor inside a diminutive body, although it gained a rival just a few months after its release in the Fujifilm GFX 50R. That line has since welcomed the GFX 50S and more recent GFX 100 models.