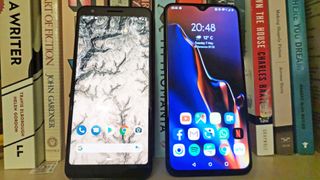 The OnePlus 6T currently reigns as champion of the affordable flagship market, a position it’s held for several months – but Google wants a piece of the action, and with the Google Pixel 3a it now has a serious challenger.

The Pixel 3a sees Google distilling the best parts of the Google Pixel 3 phone into a more-budget alternative, so it’s got many features which you can find in the high-end phone. But the OnePlus 6T has a few tricks up its sleeve as well.

So can the Pixel 3a dethrone the OnePlus 6T? We’ve put the two phones head-to-head to find out.

However, for that amount you’re getting a device with 4GB RAM and 64GB storage, which some may feel is a little on the low side.

That’s a lot more cash if you’re looking at the best-equipped OnePlus 6T – but you’re getting double the RAM and four times the Pixel 3a’s storage.

Google Pixel 3a vs OnePlus 6T: Design and display

When it comes to screen size, you get a lot more real estate on the OnePlus 6T – at 6.41 inches, its display trumps the Pixel 3a’s 5.6-inch screen.

Bigger isn’t necessarily better, but in the case of displays, the OnePlus 6T is bigger and better – its screen is AMOLED, which makes for better and brighter visuals, and is a step above the Pixel 3a’s OLED display.

The screen on the Google Pixel 3a is unbroken, with prominent bezels to the top and bottom of the front, whereas the OnePlus 6T has a smaller ‘teardrop’ notch that houses the front-facing camera – for some phone users this may be an important point to differentiate the devices, but you’ll still have more screen space on the latter phone.

You may find some features in the smaller phone that the OnePlus 6T misses out on, though – for example the Pixel 3a has a headphone jack and Google’s Active Edge, which lets you squeeze the phone to bring up Google Assistant.

On the OnePlus 6T you’ll find a 16MP/20MP dual rear camera, as opposed to a single 12.2MP snapper on the Pixel 3a – on paper it looks like the OnePlus 6T wins hands-down here, but processing is just as important as specs when it comes to smartphone photography.

Both phones have a range of options and modes to optimize pictures taken depending on the setting – for example, the OnePlus 6T has a ‘level’ to show you if the phone is tilted, and the Google Pixel 3a has a range of weather modes.

We haven’t had the Google Pixel 3a long enough to properly judge its camera, or to compare it with the OnePlus 6T, but the Pixel 3a has lots of tech in common with the Google Pixel 3, which we considered the best camera phone when it came out, so it’ll likely give the OnePlus 6T a run for its money. Once we’ve tested the newer handset, we’ll update this article accordingly.

On the front of the phones, the OnePlus 6T has a 16MP selfie camera while the Pixel 3a’s snapper is 8MP – again this might suggest the OnePlus 6T will take better pictures, but again the post-processing software is most important.

We’ve found that both cameras can take selfies with accurate depth sensing, so they can digitally apply background blur of ‘bokeh’ effects to the background.

Google Pixel 3a vs OnePlus 6T: Specs and battery

Both handsets run Android 9 Pie (although the OnePlus 6T runs OxygenOS over it), so they feel similar to use, although since Google makes both the Pixel 3a and Android, you can expect future OS updates to come to the Pixel 3a before the 6T.

As mentioned, you’re getting more RAM with the OnePlus 6T, and you’re getting a better processor too in the shape of the Snapdragon 845, which was one of the best chipsets around when the handset came out last year (although it’s since been bested by the newer Snapdragon 855).

In comparison the Pixel 3a runs the Snapdragon 670, a solid mid-range processor, but one that doesn’t compete with the 845.

On paper this means the OnePlus 6T will be slightly better at intensive tasks like gaming and video rendering – but it might also burn through the battery a little quicker.

Speaking of battery power, the OnePlus 6T packs a 3,700mAh unit, which is bigger than the 3,000mAh one in the Pixel 3a, although with a bigger screen and more powerful processor the OnePlus 6T needs it, and in practice the battery life on both devices is roughly similar.

In many ways, the OnePlus 6T is the better device – it has a bigger and higher-quality screen, a more advanced chipset, and a bigger battery; however, you’re also paying more for these features, and not all phone users need all of them.

For its lower price, the Pixel 3a still provides useful features like its competitive camera, Active Edge, and a headphone jack.

So if you’re in the market for either of these smartphones, consider whether the extra you’ll spend on the OnePlus 6T is worth it, or if the Pixel 3a’s features are all you need.