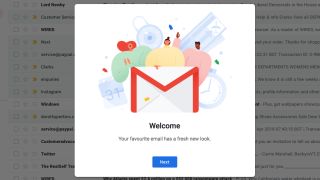 Google is taking its first steps towards phasing out the old Gmail design, replacing it with the modern version that made its debut at the end of April.

At the moment, the new Gmail is entirely optional. Individual users can choose to activate it themselves, and companies using G Suite (Google's set of apps for businesses) can decide whether to let their employees upgrade, or force them to stick with the classic design.

That's all about to change. Next month, G Suite admins can either shift everyone to the new Gmail immediately, or let each employee decide whether they want to change. They can hold off for another four weeks, but after that, everyone will be able to opt in.

Upgrades for all, eventually

Any refuseniks who haven't moved over to the new Gmail by August will have their inboxes upgraded automatically, but will be able to convert back if they want. In September, they'll lose that option and be forced to use the new design whether they like it or not.

Google hasn't yet announced when individual users will have to change their inboxes, but at a press conference in April the company said it's planning the same kind of gradual roll-out for everyone. It plans to have everyone using the new design within a few months.