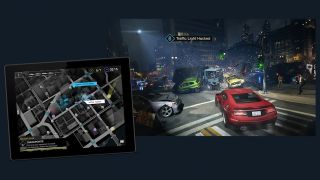 There's a growing list of video games out there involving second screen play on tablets and mobile phones but so far, they seem a bit limited in terms of actual multiplayer participation.

Sure you can check your stats in comparison to friends and play mini-games (which aren't that great sometimes), but so far, you can rarely play with other people.

Battlefield 4's Commander Mode comes the closest to letting you play real time and in-game on a mobile device, but even then, you're mostly assisting and dropping in missile strikes - which is still fun but remains slightly removed from the other players. After all, how often do you hear "the Commander is online" during matches?

Ubisoft has created an app that allows a little more connectivity to the people on your friends list and lets you really challenge them when you're away from a console or PC. With the rise of second screen gaming, Watch Dogs is showing that companion apps can be less about checking stats and more about actual mobile multiplayer gameplay.

The multiplayer experience of Watch Dogs, and the gameplay itself, promises to be more next-gen than any other open world game out there - and it may or it may not be to you, but the game is definitely taking a few leaps and bounds to make multiplayer as seamless as possible.

Watch Dogs lead gameplay programmer, David Therriault explained that the cross-platform play is basically "part of the philosophy of the game." The Montreal team wanted the game's immense connectivity mirrored outside of the fictional world, which is where cross-platform comes into play.

He added, "This whole cross-platform thing fits into that kind of philosophy; with the tablet [mobile] gaming, it's exactly the same. We tried to push some new asymmetrical gameplay aspects to the game that were not possible with PC and console gaming only."

The Watch Dogs app lets you "hack" into another person's game to essentially sabotage their route across a map. Like all the other multiplayer modes, if the other person accepts your invitation (and vice versa) you can begin the match.

With the ctOS app, your opponent has to race through four checkpoints within a time limit while it's your job to hack steam pipes, traffic lights, bridges and more to make sure they crash and burn.

You'll be playing as a handy little helicopter that you drag across the screen to follow your opponent - which also shows up on their screen with its searchlights beaming down on the driver. You can also call out police cars and SWAT vans to chase and intercept the other player depending on how many points you've racked up, though if you've run out of points, you can keep your beam trained on the car to keep causing damage. If your hacking is successful and the other player dies, the game keeps going with the driver spawning again until time is up and they lose, or they make it through the checkpoints and you lose.

What makes it different?

The game sounds simple but was pretty stress-inducing (and really fun) on both sides. Therriault told me that being an "omni-God person" present in someone else's game brings a new, challenging perspective, which I definitely experienced and enjoyed.

I didn't think playing on a tablet would be as rewarding or difficult but when I was the hacker, I had to constantly, and quickly, anticipate which object to hack because there were multiple ways my opponent could avoid my traps and gain health.

It's also great that there's the option to play with someone on PC, PS3, Xbox 360, Xbox One, PS4 plus the Wii U in the fall - meaning the player pool is wide open and you can game with whichever friend you want.

The simple interface is to be expected because you're playing on a mobile device but it feels like you're really having an effect on your opponent; seeing the cop cars pile in, the driver twisting and turning to escape, making sure your helicopter is hovering perfectly - all of it adds up to create a genuinely fun mobile experience. Other cross-platform apps kind of pale in comparison next to it.

The mass availability of the app, which will be free on iOS, Android mobile devices and the Kindle Fire HD, and the wide player pool is certainly appealing as well, making Ubisoft's ambitious goals to be the ultimate next-gen game seem actually possible.

The main campaign will take around 30-40 hours; with the five multiplayer modes (Intrusion, Decryption, Tailing, Racing and Free Roam) plus the mini-games (Chess, Drinking Game, Shell Game NVZN) and the Digital Trips (Spider Tank and Madness), there will definitely be over a hundred hours of gameplay. With the tablet and phone app, you can probably tack on even more hours.

There will probably be more multiplayer modes coming out in the future if the current ones do well. According to Therriault it's "too soon to tell" but he says that Ubisoft will keep its ears to the ground and for now "the multiplayer package now is a nice starting point and we're going to see how it goes after that."