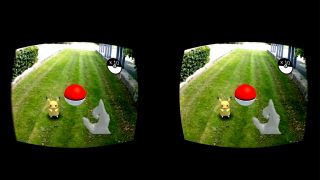 While Niantic is busy tightening a few issues with its runaway success, Pokémon Go has been re-imagined with gesture controls and headset support thanks to a tech startup.

Though far from an official product - or even a playable one - the proof-of-concept footage shows the iconic Pikachu augmented onto the player's view as they fling Poké Balls at the electric mouse using real-life hand gestures.

Despite no formal affiliation with Niantic, The Pokémon Company, or Nintendo, Gestigon chose to use the mobile phenomenon to show off what its AR/VR development kit can do.

The company believes using your own hands as a controller is key to immersive virtual experiences - giving developers a chance to see the tech for themselves.

While it may not appear as fancy as, say, the Oculus Touch, Gestigon's Poké-prototype shows off how effective - or, rather, super-effective - convincing controls can work in VR and other mixed reality experiences.

In the meantime, let's hope Nintendo doesn't get the wrong idea and file a cease-and-desist.