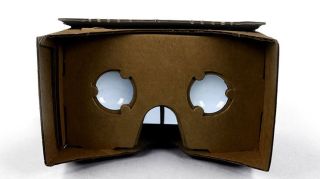 When Android head Sundar Pichai told attendees to grab "cardboard" when they left the Google IO keynote earlier today, we here at TechRadar asked one another what in the heck he was talking about. A piece of cardboard? Cool schwag, Google...

Turns out Pichai was referring to Cardboard, a very basic virtual reality viewer the search giant developed in-house. Some folding, gluing and inserting of smartphones is required on your part, but once you do this, Cardboard comes to life as Google's first VR peeper.

Cardboard is described as a "no frills enclosure that transforms a phone into a basic VR headset" on the project's Google Developers page. Since it was announced during a developers conference and all, Google is also launching an open software toolkit to make writing for VR as simple as creating an app for a phone or tablet.

From the looks of it, Cardboard is all about breaking down barriers to VR development and access. Perhaps jibing at Oculus Rift, Google wrote that despite it's growing buzz, "developing for VR still requires expensive, specialized hardware."

Update: We asked Oculus for its take on Cardboard and were told the company doesn't have a comment as it hasn't seen it yet.

Here's the interesting thing about Cardboard: you can make one on your own.

It's a project seemingly built for anyone who reveled in elementary school science fairs; all you need is some corrugated cardboard (pizza boxes work), lenses, magnets, Velcro, and a rubber band. An NFC tag is optional, though it is needed to launch the Cardboard app automatically. You'll need an Android phone with Android 4.2 or above, too.

Google included links to where these items can be purchased, the specifications needed for each, printable blueprints and downloadable instructions. Grab a ruler, glue and scissors/X-acto knife or access to a laser cutter, and you're off to the races.

Once you've placed your phone inside the headset and downloaded the app, you'll have access to a handful of demos, including a Google Earth fly over, a drive through Paris and YouTube video viewing.

The magnets are used to click within demos, but since some phones won't recognize them, copper tape works as well.

So far, Google has found the Nexus 4, Nexus 5, Moto X, Galaxy S4, Galaxy S5 and Galaxy Nexus to be fully compatible. The HTC One, Moto G and Galaxy S3 are partially compatible with Cardboard.

It's all pretty simple, but one intriguing wrinkle is that with Google asking developers to create VR experiences, it's more than likely the company is developing its own VR headset for consumers, or working on ways to incorporate VR into Google Glass.