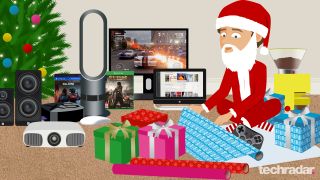 Don't worry, TechRadar's got you covered this holiday season

The holiday season is usually met with indecision, headaches and a flurry of last-minute shopping as you frantically try to balance life (because it never gives you a break) with finding the perfect gift for your favourite people.

To help you survive the winter madness, TechRadar has put together a 2014 holiday gift guide of the best tech goodies you can get, so you can spend more time watching the faces of the people you love light up with joy as they receive an awesome present from you.

After all, that's what the holidays are about, right? Having a good time with great people, and giving something to get that smile and squeal of excitement.

So happy holidays from all of us at TechRadar, and get some shopping done with our techtastic and gamerific 2014 Christmas gift guide!

The console war between gaming veterans Sony and Microsoft has been amplified this year with the upcoming release of two new next-gen consoles. Other gaming names refuse to be left out though, and have entered their machines into the console race for a chance to sit in your living rooms.

First up on our list is the Sony PlayStation 4. The system boasts great features like free streaming and recording and the PS4 is more developer-friendly - meaning the list of games will continue to grow, allowing more variety.

Along with making gamers as happy as possible, the console has big ambitions to be the most affordable, high-end gaming machine on the market and it looks like the company's hard work is paying off since demand for the PS4 is off the charts.

With its $549 price tag - the PlayStation Eye will be sold separately for $99.99 - it's no surprise pre-orders filled up and nearly disappeared before its launch date on November 29.

However, Sony claims there should be enough to go around as the holidays draw closer, so check this off your holiday gift guide list as this machine will be gone before you know it.

Microsoft's Xbox One is the other crazy popular (and much more controversial) console. Selling for $599, it's a bit pricier than its opposition - but the Kinect comes included with the whole package.

The new One console wants to be your one-stop entertainment solution for the living room by integrating live TV, games, movies and web services such as Skype, all controlled using Kinect's improved voice recognition features.

By getting one person an Xbox One for gaming, you're also picking up a whole entertainment system for the entire family.

Microsoft says with Skype and SkyDrive functions, the system would also make a great platform for businesses.

Essentially, the One is a multipurpose console that could be given to anyone, so you really can't go wrong picking one of these guys up.

If you've managed to get a PlayStation 4, it only makes sense you pick up an accompanying PS Vita.

Thanks to the new PS Link feature, you can use your Vita to play PS4 games over Wi-Fi. During sale season, we've see a PS Vita bundle drop to $199.

Thanks to its affordability and durable looking build, the $150 Nintendo 2DS is sure to be a hit with parents looking for a handheld for the younger gamers this holiday season.

The 2DS serves as an introductory gaming system and is definitely geared towards families with multiple kids who all want a handheld.

The 2DS's slightly more expensive predecessors are already a popular bunch on most holiday gift guides and with popular Nintendo-only games like Pokemon and Mario, you really can't go wrong picking up a 2DS.

More gaming gifts to check out!

You can also pick up an "old school" PS3 or Xbox 360 bundled with the latest games for a fraction of the price you'd pay for a next-gen console. Take a gander at some holiday bundles:

These other handhelds would also be a welcome present: 3DS, 3DS XL, Wii U