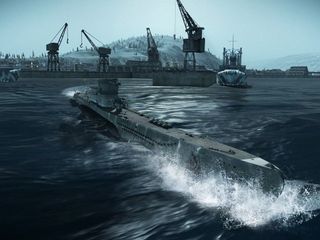 The first game containing Ubisoft's massively controversial new digital rights system, which kicks players out of the game if they lose their internet connection for any reason, shipped last week.

Silent Hunter V is just the first of many planned titles to include this 'feature', though a recent revelation that it's already been cracked may throw a spanner in the works. Nonetheless, gamers hate it with righteous passion, while the publisher thinks it's safeguarding PC gaming. So who's right? Well, everyone.

For DRM in games

1. It makes publishers prepared to invest in the PC

Retail PC game sales are declining, bar massive exceptions such as World of Warcraft, Football Manager and The Sims, but there's too much disagreement and self-interest on both sides of the argument to have presented a sole indisputable reason for that.

It might be piracy, or it might be PC gamers' move to digital distribution channels such as Steam and a growing interest in indie games. It's a question that needs an answer badly, but at the same time, it almost doesn't matter.

What matters is that the big publishers look at the number of torrent leeches, blame piracy for the reduced bottom line and act accordingly. If employing silly DRM means they keep on investing in PC gaming rather than giving up on it, maybe it's worth the minor suffering of limited installs and one-off activations. What's unacceptable is when the DRM crosses the line into actively complicating playing the game.

There's piracy and then there's piracy. The bulk of a game's sales often occur in the first week of release. It's critical, to publishers' minds, that the only way to get hold of a game during this all-important period is from a shop (or a digital download service).

If you can snag it on release day without leaving your house, piracy becomes doubly appealing. Even worse - from a publisher point of view - games can be leaked from mastering plants or distributors ahead of release.

Along the same lines is the idiot habit of staggered US and European release dates. Gamers saving money doesn't even come into it then: it's about playing the thing as soon as possible. Stringent DRM, especially when it requires a server-side activation, can delay the inevitable ripping of a game for just long enough to safeguard those vital initial sales.

LESS DRM: 2K Games relaxed the DRM in Bioshock after fan complaint about the installation restrictions

3. Needing the disc in the drive is a thing of the past

In an age of terabyte hard drives and always-on internet connections, having to scrabble around in the plastic filth of your CD collection to find the right game disc whenever you want to play has become increasingly absurd.

It's also something that's very easily cracked with replacement exes available on easily-found sites. These are frequented by paying gamers at least as much, if not more than, piratical gamers, purely to remove the hassle (see also, disabling the hateful barrage of publisher and hardware corp logo videos that load at startup). The point being a disc-check is a ridiculously archaic form of DRM. Whatever else you want to say about Ubisoft's system, at least it's done away with that relic.

4. By making online a requirement, the games evolve

Ubisoft's approach to constant-connection DRM is a big mistake in a lot of ways, most especially because it's insulting and annoying to people who've legitimately bought the games shackled to it.

However, if it had gone about things in a slightly different way, it wouldn't feel like that. Its key error is to employ the internet as handcuffs rather than a spine - a restriction rather than improvement.

We don't grumble about MMOs like World of Warcraft requiring a login, nor do we about digital download systems such as Steam. In this case, Ubi is forcing the internet onto games that aren't intrinsically of the internet- being online adds nothing to Assassin's Creed 2, for instance.

But once we're at a point where games are created with the internet in mind from the very start, we'll reap the benefits. Look at EA's streaming browser version of Tiger Woods, which does away with installation, or the way Valve have just this week turned Portal into a real-time treasure hunt for details on the sequel. Give it time, and DRM might evolve into tiny marvels of rolling new content.

NEW ENDING: Valve's Portal now has a new ending, automatically inserted into the game to tease the upcoming sequel. No one complained about having to login to get that...

Current page: For DRM in games

Next Page Against DRM in games
See more Gaming news