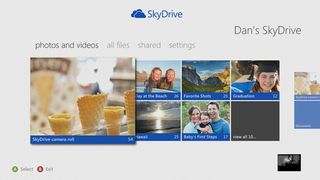 Can't wait to see those waffle cones on the big screen

You can now access your SkyDrive photos and documents from your Xbox 360 thanks to Microsoft's new app.

As well as letting you call up your cloud-stored bits and pieces on the big screen, SkyDrive app for Xbox also supports Kinect voice and gesture control so you can flail about and yell at it as well.

The Xbox app means you can now access Sky Drive from your television as well as through your Windows Phone, your PC and your web browser.

One thing that Microsoft thinks you'll find particularly nifty is the ability to take a picture on your phone and have it show on the TV screen almost instantly; this "feels like magic!" according to the Redmond brigade.

We were really hoping for something a bit more spectacular from magic, like, say, time travel or the ability to fly, or some kind of major transformative feat but we can settle for another kind of image on another kind of screen we suppose.

Look for the new SkyDrive app in the Social category of the Xbox Live apps area where it should pop up at some point today – although you'll need Gold membership on Xbox Live so it doesn't exactly come free.

See the app in action in the video below: