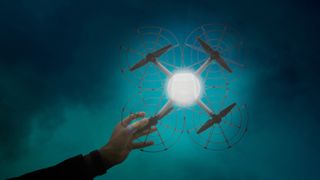 Called Shooting Star, the drone can be programmed to fly as part of a swarm which is able to be controlled by just one pilot from a single computer. Intel says that using its Shooting Star drone will allow lightshows that might once have taken weeks to be created in “a matter of days” thanks to its companion software and animation interface.

Rather than animators manually calculating where and when each drone has to be in order to create a particular image, Intel has created algorithms which are able to automate the animation creation process.

These algorithms take an image, calculate the number of drones needed, determine where they should be placed and formulate the fastest path they can take to create the image. With built-in LED lights that are able to create over 4 billion color combinations, it’s safe to say animators will have the freedom to get creative, just as long as they don’t want to create a show longer than the drone's twenty minute battery life.

To keep things orgainsed, the software is able to check the status of each drone in a fleet and prioritise the use of those with the greatest battery life and GPS reception.

Of course, safety has to be considered with drones that are designed to be used in close proximity to the public - we all saw what happened to Enrique Iglesias. To prevent damage to the drone or people in the event of an accident, Intel has constructed the Shooting Star with a soft, light frame made of flexible plastics and foam, and has encased its propellers in cages.

Intel hasn’t revealed a price point for the Shooting Star, or whether it will be made available to the public, so you’ll have to sit on those plans for a magnificent Holiday light show for now.

Considering Intel had to get FAA approval to fly its drones in a 500 strong swarm in order to break a Guinness World Record recently, it’s unlikely that we’ll see Shooting Star light shows outside of professional events any time soon.

This is a big achievement for Intel in the area of drone fleet control, showing that large numbers of drones can perform complex tasks in unison under the control of only one person. Such technology could be useful to a variety of industries, not just entertainment, and could even prove useful in transporting large items or assisting in search and rescue missions.