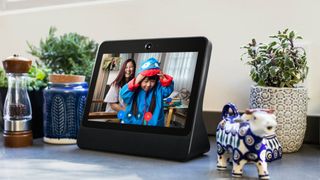 The Facebook Portal was launched back in 2018, in the wake of a host of privacy scandals rocking the company.

It seemed a curious time to ask consumers to invite Facebook's smart displays into their living room, with a focus on video calls making 'spy camera' jibes all too easy.

One year later, the Portal is still around, and – despite a less-than-reassuring earnings report for 2019 – apparently selling enough units for Facebook to roll out the hardware outside the US.

The Portal and Portal Plus smart displays will be coming to Canada and across Europe, showing an extended shelf life for what could have been a very short-lived product.

Facebook made the announcement at its F8 developer conference in San Jose, California, alongside news of a Facebook app redesign and a wider rollout of Facebook Dating (coming to nine more countries).

We also got a closer look at Facebook's plans for integrating the Portal with other Facebook-owned services. The Portal range will soon support WhatsApp calls, and therefore end-to-end WhatsApp encryption, which may go some way to allaying fears over user privacy.

Portal owners will also be able to share images from their Instagram feeds, and footage from Facebook Live, making the most of the Portal's smartphone-shaped display.

Facebook has made no secret of its plans to integrate its chat services for Messenger, Instagram and WhatsApp down the line – and it seems like the company's first smart home product will be a test ground for those services playing nice with each other.