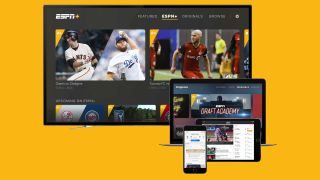 Update: ESPN+ is now available on Xbox One and PS4 consoles, ESPN announced today. The service will still stay priced at $5 per month or $50 per year, and the additional platforms will help the service expand beyond its one million current subscribers.

Until now, streaming services have been laser-focused on bringing you the best shows and movies they could get their mitts on - often going as far as creating their own to win over the next generation of cord-cutters and cord-nevers.

This line of thinking has brought us shows like House of Cards and Stranger Things on Netflix, The Man in the High Castle and Transparent on Amazon and The Handmaid’s Tale on Hulu. These shows are undeniably great in their execution, however, they aren’t going to persuade someone who loves sports to give up their cable package.

For that crowd, ESPN has teamed up with a company called BAMTech to bring streaming video to the hundreds of thousands of ride-or-die sports lovers out there.

What is ESPN+ and what does it offer?

ESPN+ is a streaming service package from ESPN. The package brings together live events, on-demand content and original programming not found on any other ESPN network - and puts them alongside free content from ESPN’s mother service.

It’s important to point out that while it’s separate in terms of content from anything else on ESPN, it shares a lot of the same attributes to the content you’re used to watching. Namely, it’s highly produced sports content that focuses on the biggest leagues, players and teams in the NHL, MLB, MLS, NFL and NBA. Subscribe to it, and you’ll often float between the different leagues, selecting teams to follow and watching highlights from their last game or predictions about what’s going to happen for them next.

The best equivalent we can think of for ESPN+ is YouTube Red - YouTube’s supplementary streaming service that gives you extra shows, behind-the-scenes content and, most importantly, an ad-free environment to watch the content you already love. While ESPN+ may not offer exactly the same content you’ve come to love on standard ESPN, it brings you much more of the same type of content.

ESPN+ is also similar to YouTube Red in terms of price - you’ll only pay about $5 a month for ESPN+ or subscribe to 12 months of the service for $49.99.

So, what does that $5 per month entry fee get you?

With ESPN+ you’re able to watch every out-of-market MLS match, alongside one NBA game and one NHL game per day during their respective seasons. In addition to games from the NBA and NHL, you’ll also be able to watch live sporting events like the PGA Tour, three of the major Grand Slams and top-tier boxing matches, plus some international sports as well.

During our first day with the service, we were able to watch an English League One soccer match between Bradford City and Shrewsbury Town while it was happening, then switch over to the 30-for-30 documentary “Four Falls of Buffalo”. Later that night we saw that there was an MLB game between the San Francisco Giants and San Diego Padres that we would be able to catch, and plenty of MLS games during the weekend.

How do I watch ESPN+?

All things considered, ESPN+ is pretty easy to tune into. That’s because ESPN+ is built off the back of ESPN’s already pretty robust omnipresence on PCs, tablets and smartphones.

Specifically, you can tune into ESPN+ on your web browser by heading to plus.espn.com, and signing up for the service.

If you’re more of a mobile sports watcher, download the ESPN app from either the Apple App Store or Google Play Store and sign up for the service there. Or, if you like the traditional feel of sitting on the couch to watch the game, ESPN+ will be available from launch on Apple TV, Chromecast and the Amazon Fire TV platform - and now on the Roku platform, too.

There’s no price difference between the platforms, and one account can be carried over to the other platforms just by signing in - which is pretty convenient. Speaking of convenient, because ESPN+ ties into your existing ESPN account, you can use the same login info.

Right now, ESPN+’s biggest problem is that its web player can be a bit buggy at times. (We experienced all sorts of buffering and playback issues before giving up entirely and switching over to the mobile app exclusively.) It's not a deal breaker necessarily, but it's certainly not helping the service win any points in our book either.

One last thing that’s worth pointing out here despite its very obvious nature, is that you’ll need access to the internet to watch ESPN+ - i.e. even if you decide to cut the cord, you’ll still need to pay your cable company (or ISP) for internet access. If you’re reading this website right now, it’s something you pay for already - so just don’t cut your cable provider off entirely should you decide to cut the old cable TV cord.

How ESPN+ is different than ESPN, ESPN2, ESPN3, etc…

ESPN is trying to be very careful with ESPN+. The last thing the media giant wants to do is cannibalize its own business or, worse, ruin its standing with cable companies on whom it depends on carrying its service at a reasonable price.

To that end, there’s not a ton of crossover between the stuff you’d find on ESPN - namely, sports commentary shows like Sports Center and Around the Horn - and the stuff you’d find on ESPN+. Right now, that consists of a lot of very specific content for MLB, NHL and MLS fans. You get one game per day for either of the former two leagues, and a full line-up of MLS games come Saturday - but usually no more than a game or two on at a time.

Besides live content, the other component to consider with ESPN+ is its library of excellent ESPN documentaries and ESPN+ exclusive shows. This would include ESPN’s excellent 30-for-30 docs, and new shows like Detail with host Kobe Bryant, Draft Academy, ESPN FC, In the Crease and more. These are great if you’re in between games and you’re looking for something inspirational or captivating to pass the time.

All that said, if you’re not a cable subscriber and the only service you buy into is ESPN+, you’ll be missing out on a fair amount of programming: While we were busy watching that English League One matchup, ESPN was playing Pardon the Interruption; ESPN2 had NFL Live and ESPN3 had a number of upcoming boxing matches.

Without cable, you can’t tune into any of them - and because the services are so closely tied together, you’re constantly reminded of all the content you can’t watch.

Perhaps one day you’ll be able to pay for one service to get everything on ESPN - sports talk shows, live events, content from MLB.tv and the NFL Network and ESPN docs all in one spot, but for now that’s just not possible.

For us, right now, the answer is no.

Having access to a number of MLS games and one to two NHL and MLB games is wonderful and is more than enough to fill a day’s worth of programming. Add the 30-for-30 docs and you’re sure to have an action-packed week with the service.

But once you’ve run through the documentaries, watched one or two episodes of the new shows and come to the end of the MLB or NHL season, well, there won’t be much content there worth watching.

But ESPN+’s biggest selling point is that it’s cheap and its $5-per-month price tag is unlikely to break the bank for any of its subscribers.

Does that mean it’s worth signing up for a 10-year, $500 contract? No. But this rookie streaming service has plenty of potential.