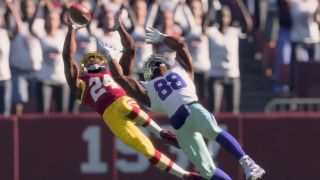 EA has been outlining its vision for the future of gaming, and the company is gazing skywards, to the cloud, and “transformative technologies” like AI, to build Project Atlas, loosely described as an integrated “engine + services” game development platform.

So yes, prepare yourself for a lot of buzzwords, but the broad idea is to build a cloud platform that delivers far more immersive gaming experiences than we have today.

In other words, game environments that evolve, so when you come back to the virtual world the next day, things may have changed based on the input of other players, or AI elements, and indeed the real world may have an impact on the virtual one.

EA envisions the (Frostbite) game engine and game services (such as online matchmaking and the social side of the experience) all being rolled into one cloud platform, with the game running on an EA server, and folks able to log in and play from any device, anywhere.

Ken Moss, Chief Technology Officer at Electronic Arts, explains in a Medium blog post: “We’ve been developing software that utilizes the cloud to remotely process and stream blockbuster, multiplayer HD games with the lowest possible latency, and also to unlock even more possibilities for dynamic social and cross-platform play.”

Moss believes that Project Atlas will blur the lines between the traditional game engine, and the game services built around it, effectively merging them into one big seamless cloud-powered experience.

He further explains that this is about empowering developers not just to be able to craft fancy, shiny graphics thanks to a smart game engine, but to produce a better overall game across all aspects of the experience, with online services that facilitate “deeply connected experiences between players and content”.

And indeed much more involved levels of personalization in terms of players having an impact on the game world, and generating content for it, making for more of a living, breathing environment as we’ve already touched upon.

We also mentioned artificial intelligence earlier: so how does that fit in? On one hand, this will be working behind the scenes, so when a developer is crafting a game, AI will be able to help with, say, the balanced distribution of resources in a shooter.

But also from the player’s point of view, it can facilitate NPCs that have believable personalities and reactions to your character. Moss further cites an example of AI driving the commentary on Madden: “Imagine that … you’ve just thrown your second interception of the game against the same cover 2 defense that caused the first turnover.

“Instead of the commentator simply stating that you threw a pick, the AI enables contextual, real-time commentary to reference the fact that you’re throwing to the sideline against a cover 2 defense and should have thrown against the weak zone over the middle to your tight end, who was open on the route.”

Not only does this make for a far more realistic football experience, but it’s (hopefully) helping you to become a better Madden player.

Moss lays out a compelling vision, for sure, although he does admit that a lot of this stuff already exists, albeit separately – what EA wants to do is bring it all seamlessly together in Project Atlas, making it as easy as possible for developers to create these sort of living and breathing game environments, with all these bells and whistles, in the cloud.

There are already over a thousand EA employees working on Project Atlas, along with “dozens of studios around the world contributing their innovations, driving priorities, and already using many of the components”.

But while there are certainly a lot of big – and laudable – concepts touted here, naturally internet connectivity will have to play its part, being the one obvious stumbling block of taking gaming cloud-wards.

Especially when you’re talking about playing across all devices, meaning using mobile hardware for gaming on the go, and therefore looking at technologies such as 5G to facilitate that.

However, certainly on the face of it, Project Atlas sounds like a compelling vision of gaming in the future.