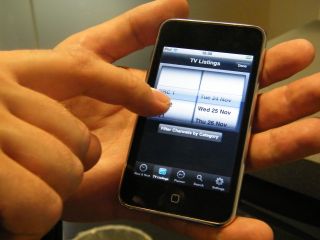 The arrival of Sky's HD electronic programming guide this year was welcomed by many in the HD community, but was it really that much of an overhaul?

Sure, much was made of the debut of Sky's mini TV feature, episode stacking and search options, and the makeover did reveal how much difference a tweak here and a brush up there can do to making an EPG work for you rather than against you.

But what Sky has achieved is piecemeal compared to what could be winging its way to your televisions some time in the near future.

TechRadar was lucky enough to peer behind the curtain of NDS – a UK-based company which is looking to change the face of TV menu systems as we know it. Award winning and with an R&D department that's bursting at the seams with innovation, NDS may not be well known to consumers, but it delivers technology behind the scenes to the broadcast world which make most of the UK's set-top boxes tick.

Guided by Jonathon Beavon, Director of Marketing at NDS, and Kevin Murray, Systems Architect – New Initiative – for the 3D side of things, here's six EPG solutions, which may well herald how we view TV in the future…

TechRadar: Why would we use this application?

Jonathon Beavon: Using this app, you can actually see what's on even though there isn't actually an EPG on the screen, so you are not annoying the others around you.

TR: Is there any extra functionality?

JB: You also get web apps to go alongside the channel information. In this case we have info from Metacritic. Obviously, if as an operator you wanted to use this content, you would have to get permission from the website.

It's extra content from the web, in addition to stuff that's on the platform. It's treating the iPhone like a remote control, but at the same time you don't have to go on to your laptop to find out other information about the programmes.

You can use it both through 3G and Wi-Fi and theoretically do it remotely without being in the room. But we already have applications that fulfil the record anywhere role. We have a lot of control of the software that runs on the software box; some other applications haven't got this access.

TR: When will we see this app in the App Store?

JB: We are currently showing this application to operators and asking them if this is something that you would want to do. They might have something already and we can show them how to improve it.

What the consumer sees is an image with the options available to them. At the bottom is a synopsis with why it is recommended, reviews and even user reviews along a tab.

For this we use a variety of engine plug-ins, as some are great at analysing movie content and plot structure, others are better at half-hour British TV shows and so on. They all take different approaches, so we have an API to connect to the relevant ones.

The consumer would see this content launched through a green button. So if you like this, then you could choose these movies to watch after.

JB: You would probably see it automatically at the end credits of a movie or a show, like you would with 'press the red button'. For these recommendation engines it is like a face to the back-end technology which they use.