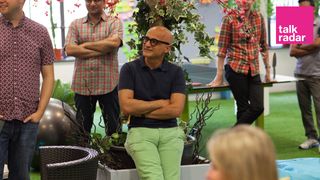 We’ve all been in the situation where you know you should go to the doctor, but it’s only a minor complaint. So, you decide to check first, Googling your symptoms...within half an hour you convince yourself that you’ve got an incredibly rare and incurable blood disorder.

Obviously you'd be better off actually seeking the advice of a medical professional, but who has time or the energy to trudge all the way to the doctor's office? If only there was a way you could get accurate, personalized medical advice on your phone.

That’s the mission of Babylon Health. Babylon already has an artificially intelligent chatbot that is being used by the UK’s National Health Service (NHS) that can help you to figure out which health care professional you need, and has a dedicated app that can connect you to a GP on your phone.

You can pay per consultation or subscribe, see counsellors, and even get prescribed medicine. And the next generation is promising a whole lot more.

Created four years ago, the app now has over a million users worldwide, as well as a clinical service in Rwanda called babyl that connects people to medical professionals through smartphones and dedicated booths equipped with digital tablets. In the first six months of the service existing, almost 10% of the adult population of Rwanda has registered with babyl.

We met with Dr Ali Parsa, CEO and founder of Babylon Health to talk about his plans for Babylon and the future of healthcare.

TechRadar: How did you first decide to build this app?

Dr Ali Parsa: "I built a chain of hospitals. I got lucky and it did incredibly well. The business went from nothing to a few thousand employees and a few hundred million dollars of revenue. I took it public and I sold it."

"The reason I [sold it] was because when you run hospitals, you very quickly understand that the vast majority of people’s healthcare needs have very little to do with hospitals."

"And then how do we do that at prices that everybody in the world can afford?"

The cost of good health

TR: Do you feel that a paid service like this one has a place within the NHS?

AP: "[In the NHS] every GP is a paid service. It’s a business. So that’s fine, but they’re being paid by the National Health Service."

"If you register with a great GP, they’ll see you within a few hours or days. But if you have a GP who isn’t so great they see you within two or three weeks."

"If you went to Babylon right now, the next available appointment is in 12 minutes. Why couldn’t the NHS pay Babylon to be your GP?"

"You can be anywhere in the country and [Babylon] can see you in 12 minutes. One in ten times I have to send you to an actual physical person."

"One in ten times I tell you to see a GP near you and I pay that person. Say you [currently] go to the GP two times a year, that means once every five years I need to send you to someone physical."

TR: What happens the other nine times?

AP: "We see you on the phone. We prescribe, we know exactly what’s wrong, we cure you. You need no physical examination, you’re done."

"The BBC recently put Babylon in the top 10 science and technology innovations they believe are going to change the world. On the BBC Horizon programme last week there was a machine versus a doctor, and the machine was diagnosing as well as a doctor."

This is an interesting claim. In the episode, a GP gives herself an imaginary syndrome (fibroids), gives the chatbot her symptoms, and it manages to correctly diagnose her. Not only that but the doctor agrees with the second and third diseases in the list of differentials the AI provides.

It’s very impressive, but it isn’t exactly what Ali seems to be claiming here. This feels important as the moment the machine works better than the doctor, seems to us to call into question the need for the doctor. We asked Babylon about this and a spokesperson said:

"What you are seeing is the back end of the machine, this is not what the end user (patient) would see. Please keep in mind that this technology is a work in progress and is being continually developed every day. Version 3 of the babylon app will assist our doctors with diagnosis, giving them more time to focus on their patients.

AP: "Imagine putting into the hands of every human being on Earth through their mobile phone, a doctor who can diagnose them. That, I think, is a phenomenal thing to be able to do."

TR: How far away do you think we are from that happening?

AP: "We will be releasing a product in the next few months that can diagnose 80% of all primary care diseases. Now."

"In the next few months we’re going to do something else which is really cool which is create an avatar of every human being that uses our apps."

At this point Ali opens up a prototype of the next generation of the Babylon app, and shows us a blue avatar of a man with all the organs represented, the heart is the only organ that isn’t blue, in a soft yellow. Underneath the avatar are individual sections for each part of the body, with readings that relate to that body part. Under the heart category, the cholesterol reading is yellow.

"I think [with this app] we can put a diagnostic engine into everybody’s pocket. We can start putting an understanding of your body into your pocket. Because what that allows [Babylon] to do is to start predicting your health. And then try to foresee issues. Because that’s where the costs are."

"Most diseases by the time they present their symptom, a £10 problem has become a £1,000 solution. Everything we do in Babylon is about this. How do you predict a disease ahead of time? What I just showed you, that avatar of me; behind that sits a massive amount of predictive analytics to constantly see how I’m doing."

TR: And does it recommend courses of action to stop you getting ill?

TR: What do you feel about the place that empathy has in the medical process?

AP: "I'm not saying that a machine will replace a doctor. Diagnosis does not need a doctor or empathy. Diagnosis is a probabilistic graphical modeling event. I’m telling you what the probability of you having a disease is. Machines can do probability analysis much better than a human brain can."

"But can a machine put its hand on your shoulder and say ‘Trust me, I’m going to look after you’? That’s a fundamentally different part, and I think that Babylon will bring empathy back into medicine."

"Go to your GP with a symptom now, and they will spend five, eight, ten minutes with you to diagnose, then say ‘okay, that’s your problem, go’. Where’s the empathy in that? If you went in and said, I’ve used Babylon, it said this is the disease I have. They ask you a few questions to make sure it’s right, then they have five minutes left."

"Let’s spend that five minutes to see how you’re feeling. See what else is bothering you. How many patients with mental health problems do we catch? Why are GP’s not catching people with mental health issues? Because they are focussing on the disease, not the full picture."

TR: If people can get a prescription from you, how do you stop people abusing the system to get drugs they shouldn’t have?

AP: "We have a whole list of restricted drugs that we never give. Our GPs work in the NHS. Why would they make a mistake and give you a drug here that they wouldn’t give there? We have no interest in your drugs, we don’t make money on your drugs."

We asked Babylon for further clarification on its policy and got this response: "All our doctors prescribe medication according to national guidelines for safe prescribing, in addition to following our own medication management policy which further safeguards our patients."

"When it comes to high risk medication, including drugs that people may misuse, babylon has extremely stringent policies to ensure safe prescribing. Furthermore, babylon has implemented mandatory photo identification for controlled medication which exceeds the requirements of the regulator (CQC). This is an example of our relentless pursuit of safe prescribing through a digital channel.

While discussing the potential dangers associated with the service Ali referenced internet banking, and the parallel between digital healthcare and digital banking. Undoubtedly there was a time when people were hesitant about using internet banking because they were worried about its safety, but we wonder whether the risks associated with medicine are greater than those with banking.

"I think we’ve got to be really careful. Everything that technology does, there are aspects that it will do better than existing, and there are elements that it’ll do worse. And it’s a choice."

TR: How far away do you think you are from globalizing Babylon healthcare?

AP: "To create a company that serves the globe takes 20 years. That’s just the reality. Even Uber, who is growing so fast, how old is it? Six, seven years old, and that’s probably the fastest globalized company. And they’re in a tiny part of the globe still. We’re in the business of creating the Google of medicine."

"I think that the software part of our business; the fact that we can put a diagnostic tool in the pocket of anyone in the world who wants it, we can create the avatar that I showed you for every human being on Earth. We can globalize that bit a lot faster."

"Putting doctors that can consult with you in every country; that takes longer. We have spent the last three years creating a product that is truly world beating. There is no product in the world that does what we do."

"You and I have the same access via mobile phone that Bill Gates has, and the cleaner in our office has. That is true democratization because it doesn’t really matter how rich you are."

"That’s why I think we, or someone else like us, will fundamentally change that game. And that is brilliant for humanity. I hope somebody does it for education too and then we’ll be a long way towards a better place."

It's difficult not to be intoxicated by the message behind Babylon. The idea of its service is very alluring, and of course it would be amazing to see a world where everyone has access to healthcare, but we feel it would be remiss of us not to consider the issues too.

As with all AI developments, if it takes away some of the work of the human currently doing the job, there is the risk that the human will just end up paid less, or working less, rather than freed by the development. And specifically with healthcare, does a paid service risk creating a world where only the wealthy can be healthy?

Scepticism aside, the ability to have an appointment with a doctor in minutes is a brilliant service, and that is reflected in the overwhelmingly positive reviews on the Google Play Store and App Store for the app. It will be interesting to see what form the diagnostic tools take in the next generation. Needless to say, we will be keeping a close eye on Babylon as it develops.