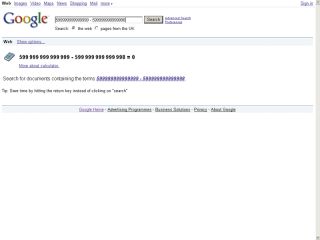 Computers might struggle to exhibit intelligent behaviour, but blindly performing arithmetic calculations is surely their forte. Or is it?

The failure of Google's online calculator and Excel's apparent inability to give correct answers to simple calculations are both well-known problems among programmers, but these aren't really bugs in the normal sense of the word. Instead they're just a consequence of the fact that computers suck at maths.

Computers perform calculations in quite a different way from the methods that humans use to do arithmetic – and that means that they habitually come up with the wrong answer. Here we investigate some of the shocking consequences of this revelation before delving into the reason why computers suck at maths.

For anyone still to be convinced that computers can't get simple arithmetic right, let's start off with a few examples that you can try out yourself.

OK, this answer might not be far removed from the correct answer of 0, but why can't the calculator come up with the right answer – an answer that's blatantly obvious to anyone who is conversant with simple arithmetic?

How computers do maths

Although computers can handle integers (whole numbers), for general-purpose arithmetic they store numbers in floating point format because it's so much more efficient in memory use.

Let's take the double precision floating point representation as an example. It uses 64 bits to store each number and permits values from about -10308 to 10308 (minus and plus 1 followed by 308 zeros, respectively) to be stored. Furthermore, fractional values as small as plus or minus 10-308 (that's a decimal point followed by 307 zeros and then a 1) can be stored.

The secret to this apparently amazing efficiency is approximation. Of those 64 bits, one represents the sign (so whether the value is positive or negative), 52 bits represent the mantissa (that's the actual numbers) and the remaining 11 bits represent the exponent (how many zeros there are or where the decimal point is).

So although a much greater range of numbers can be stored using floating point notation, the precision is actually less than can be achieved in integer format, since only 52 bits are available. In fact, 52 bits of binary information represents a 16-bit decimal number, so any values that differ only in their 17th decimal point will actually be seen as identical.

But that's forgetting one important fact – that computers work in binary. And although 0.1 might have only one significant digit in decimal, in binary notation the mantissa is a repeating sequence. This means that 0.1 can never be represented accurately in binary, no matter how many bits you use.

Current page: How computers do maths