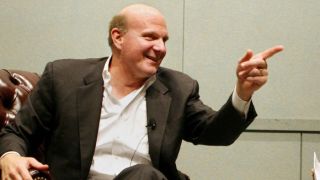 Microsoft's Windows 8 operating system and Surface tablet tie its software and hardware together for the first time, but the company's CEO doesn't feel as if it's mimicking "low-volume player" Apple.

"We like our model, as we are evolving it," said Microsoft CEO Steve Ballmer in a post-Windows 8 launch interview with the Wall Street Journal.

"In every category Apple competes, it's the low-volume player, except in tablets."

"In the PC market, obviously the advantage of diversity has mattered since 90-something percent of PCs that get sold are Windows PCs," Ballmer said.

Today, Microsoft added to that total, announcing it reached 4 million Windows 8 upgrades in the first few days of the operating system's availability.

"We'll see what winds up mattering in tablets."

But Microsoft isn't the smartphone leader, either

Ballmer's comments make it seem as if Microsoft is leading Apple in every category, but it's really Google that is the smartphone market leader.

Google's Android operating system is expected to be activated in 1 billion devices by next year, adding to the company's current 52.2 percent market share.

Apple controls 33.4 percent of the mobile device market, according to the same pre-iPhone 5 numbers.

Windows Phone 8 devices like the HTC Windows Phone 8X and Samsung Ativ S are could help Microsoft push that number up a little bit.

Ballmer was right about one thing: Microsoft can't call Apple a low-volume player in the tablet market.

Apple has sold more than 100 million iPads since the 9.7-inch devices launched two and a half years ago.

With the 7.9-inch iPad mini on the way, analysts believe that Apple could double that figure, selling 101.6 million iPads in 2013 alone.

Microsoft's CEO isn't the only executive waging a war of words.

"Old technologies [like rotating discs] are holding us back," Schiller said of the components in most Windows 8 PCs. "They're anchors on where we want to go."

"Our competitors are afraid to remove them. We find the things that have outlived their useful purpose."

In the end, it's a battle between a high-volume business heavily anchored in old components and low-volume, innovative technology solutions.