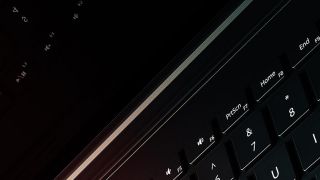 Is this the new Surface Book?

Update: Well, looks like the bubble has burst on this being a teaser for a black Surface Book 2.

Rudy Huyn pointed out on Twitter (via The Verge) that the image is a re-purposed promo for the original Surface Book.

You can see how Microsoft may have tinkered with the image, darkening and cropping it so the end result looks like many product teasers we've seen from innumerable companies in the past.

Of course, it's still unconfirmed just what this device is, so stay tuned for further developments on the Surface Book 2.

It makes a change to have a leaked photo come straight from the source: Microsoft has shown off what looks like a black, redesigned Surface Book through the official Surface Instagram account. "Your key to success" runs the caption.

There's no confirmation that this is the second generation of Microsoft's own-brand laptop, but it certainly looks that way - #DoGreatThings is one of the hashtags accompanying the post if you're looking for more clues.

Based on the brief glimpse we get of the laptop, it looks like that famous Surface Book Dynamic Fulcrum Hinge could be in for a redesign as well. Other than that it's difficult to tell what Microsoft's got in store for its next wave of machines.

We've heard a handful of rumours so far about what Microsoft is planning for the follow-up to the Surface Book it launched back in October 2015 - the first time the company had rolled out a Windows laptop it had made for itself.

Up until now Microsoft has stayed pretty tight-lipped about its plans, though it's a safe bet that the Surface Book 2 will land at the same time as Microsoft's second Redstone update (RS2) for Windows 10, the successor to the Anniversary Update that arrived this summer.

The new laptop might also come rocking Intel's new Kaby Lake processors. If you're holding off for version 2.0 of Microsoft's Surface Book, then it looks like Microsoft itself is ready to get the speculation started.