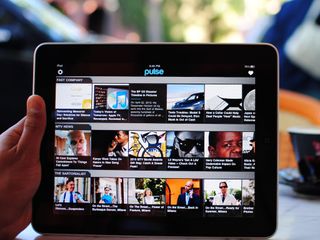 One of the craziest online screw-ups by a media company is currently playing out.

Rather than being primarily text-based, it aims to pull in imagery for each article, providing a more aesthetic and elegant experience than competing apps when you're working through feeds.

Pulse has been riding high: it's well-rated in the App Store and Apple CEO Steve Jobs mentioned it at WWDC on Monday. But then things started to go crazy. The New York Times wrote a story about Pulse, but this only alerted the publication's legal department, who forced Apple to pull the app.

Twitter went mental, bloggers were in uproar, and the app returned. Had sanity prevailed? Nope. Times spokesperson Robert Christie told the world: "We think it has been reinstated by error, and we have asked Apple for an explanation." In a totally surreal twist, the Times itself is now covering the ongoing spat.

So what did Pulse do to anger the Times? Apparently, it had the audacity to 'frame' the site's content when a full article was accessed, and it's also a commercial product.

The Times's legal brains and talent (and I use those words loosely) decided this breached two of the absolute no-no terms regarding Times content. The fact that Pulse acts like almost every other RSS reader and Twitter client out there doesn't entirely seem to have escaped the Times, but in one of the most boneheaded pieces of reasoning I've ever seen, Christie said that if other commercial RSS readers were making use of Times content, they were most likely doing so under an agreement with the The New York Times Company.

This is clearly bullshit of the highest order.

No RSS reader developers gain permission/agreements with content providers, because doing so would take years, and there's an assumption that feeds are provided freely, so you can access content.

So, The New York Times Company, here are my helpful hints for you. Choose one of the following:

1. Stop using your heavy-handed legal morons to drag your company back into the 1990s, and recognise that if you provide RSS feeds, applications are going to - shock! - use them. And, you know, some people making apps that do might even want to eat, and so they'll charge for their product (like you do), but they're not charging for your content.

2. Remove all your feeds, which deals with the problem nicely, since no evil RSS readers and Twitter clients will then be able to 'frame' your content in the manner you find so abhorrent. Of course, you'll then be called Mr Stupid of Stupid Town in the Stupid Corner of the Stupid Bit of the internet, and you'll lose a load of readers, but, hey, you brought that on yourselves.