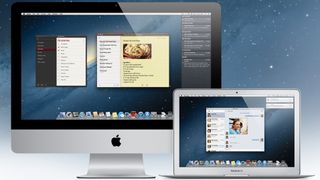 OS X Mountain Lion could be here in days

The launch of the next version of Mac OS X may be days away after Apple seeded the Gold Master version to developers.

Mac OS X 10.8 Mountain Lion has been available in Beta for developers, but this latest version is all-but complete with very few changes likely before the full version is outed to consumers.

Announced in February and unveiled in full at the recent WWDC conference, Mountain Lion brings a host of new features to MacBooks, iMacs and Mac Pro computers.

Apple has incorporated a host of functionality from its popular iOS mobile software including AirPlay Mirroring which allows Apple TV owners to wirelessly send content to their HD TVs.

There's also the Messages app, which brings instant free instant messages between OS X and iOS device users, along with the Notes and Reminders apps.

The upgrade will be just $20 for US users from the Mac App Store and we'd expect that to translate into around £15-£20 when Apple outs the OS, probably within the next couple of weeks.