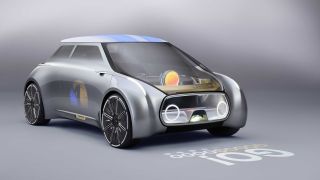 As the world gets more and more autonomous, one of the biggest unknowns in the automotive industry is where car enthusiasts will get their kicks. BMW and Mini, both known for being driver-centric, released its vision of the future of driving pleasure.

According to BMW, drivers of the future will have the option to choose autonomous or fully-human driving and will still offer the same ultimate driving machine experience when human hands touch the wheel.

One way BMW will accomplish this is by integrating its artificial intelligence (AI) with driver assist technologies, allowing the AI to work in the background while also learning from driver inputs. BMW wants to turn every driver into the ultimate driver.

As with any concept car coming out, tomorrow's BMW will also feature a AI named The Companion. This ominous-sounding windshield-based head-up display (HUD)will give advice to drivers, automatically perform normal driver tasks, and learn about the driver or owner.

Minis of tomorrow will still be the pint-sized urban machine it has been for years, but now will have more customizations and connectivity. The "Cooperizer" will link drivers to a digital intelligence allowing occupants to fully customize settings, communications, entertainment, and even autonomous-driving options.

Mini will still be the go-kart of the car world, with drivers gaining augmented reality displays and cool intuitive assists. One of the visions of the future Mini will be for the vehicle to take itself to charging stations, car washes and parking spots, or even the next user.

Mini also wants to create a community of owners who can share their experiences together. The AI will identify, coordinate, and organize an outing with a friend who has tickets to the latest event but needs a ride.

Neither BMW's or Mini's VISION NEXT 100 concepts are going into production anytime soon, but it does offer a glimpse into what consumers can expect from a future world of autonomous travel from the giant of driver-focused vehicles.