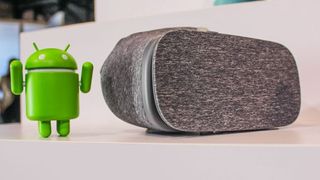 Samsung's Galaxy S8 and Galaxy S8 Plus are making the leap into Google's virtual reality world as a Daydream-ready update is rolling out to the phones right now.

Google VR made the announcement on Twitter this afternoon, marking the compatibility of Samsung's devices with the Google Daydream View headset.

The Daydream-ready update is rolling out now to @SamsungMobile Galaxy S8 and S8+. Explore new worlds with #Daydream. https://t.co/KaRNJEcURi pic.twitter.com/PEeC6RfyyZJuly 31, 2017

We've known Daydream support was coming since the Google IO conference in May, and today's update means Galaxy S8 and Galaxy S8 Plus owners can now use their phones to power the Google Daydream headset. This expands the phones' VR scope beyond the Samsung Gear VR as well.

Unlike the Oculus Rift and HTC Vive, Daydream View doesn't need to be hooked up to an expensive PC. Instead, users slip their smartphone into the visor and run games and apps on their phone's display and processors.

What's more, Daydream is much cheaper than its higher-end competitors. That's especially true today through August 12, as Google is taking $20 off the Daydream View's regular $79 price in the US.

Now, you'll pay $59.99 for the headset at Verizon and Best Buy, while Amazon has the Daydream View for sale at $63.

Galaxy S8 and S8 Plus support is a nice feather in the cap for Google Daydream. There are more compatible phones on the way this year – CEO Sundar Pichai says we'll see 11 Daydream-ready phones in all – giving Google solid standing over other smartphone-supported headsets with much more limited compatibility.

And this isn't the end of the Google VR story this year, either, as we'll see the first standalone Daydream headsets, made by HTC and Lenovo, launch before the New Year.