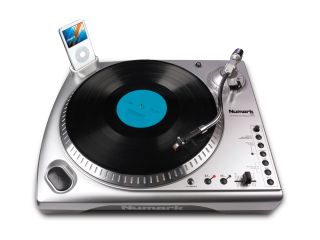 The Numark TTi turntable can rips records direct to some Apple iPod models. A USB connection takes care of the rest

DJ kit maker Numark has come up with a novel way to inject new love in your old vinyl collection - simply rip it to an iPod with its new TTi turntable.

The Numark TTi turntable works just like any other vinyl record deck, except it rips your records as they play, and then dumps the results on to an iPod that's sitting in the TTi's built-in dock, according to Wired.

Numark says you can rip vinyl directly to any 5G iPod or the iPod classic, as well as 2G or 3G iPod nanos. Owners of older iPods will need to rip their records to iTunes first. The TTi comes with its own USB connector expressly for that purpose. The Numark TTi can play 33rpm, 45rpm and 78rpm discs.

Also included in the $449 (£230) TTi bundle are EZ Vinyl Creator for the PC and EZ Audio Converter software for converting your tracks for playback in iTunes. Both packages are compatible with Gracenote's music database so you won't need to key in all those track titles by hand.

The Numark TTi goes on sale in Q2 Stateside. A UK release has yet to be confirmed.