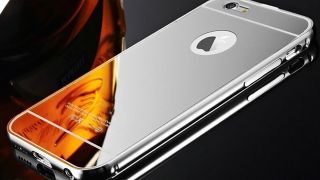 It's been a busy weekend for iPhone 8 rumors: right off the back of news that the wireless charging tech Apple wants to put in its next handsets might not be ready by September, we've got speculation that a special "mirror-like" finish is in the works for the flagship phone.

The tip-off is courtesy of seasoned Apple leaker Benjamin Geskin on Twitter, someone we'd trust more than most when it comes to iPhone info, who says that a source inside the company told him what was in the pipeline.

According to Geskin, four colors are in the way for the iPhone 8, with the others presumably white, black, and rose gold. We should point out that the image above, tweeted out by Geskin, is an older iPhone with a reflective case, but it gives you an idea.

Previously we'd been expecting up to six colors for the iPhone 8, with red, gold and gray also on the table, but the mirror-like finish is something of a curve ball. It would certainly make the tenth anniversary iPhone stand out from the crowd, including the iPhone 7S and iPhone 7S Plus expected to launch alongside it.

We're just glad to see a rumor that isn't about whether the Touch ID sensor will be on the front or the back of the iPhone 8, to be honest - a saga of speculation and gossip that feels like it's been running for the whole year.

Also on the cards for the iPhone 8's unveiling in September are a bezel-free display, a vertically aligned dual-lens camera with some extra AR smarts, and possibly even a curved screen. We've rounded up all the rumors we've heard so far into one place for you here.