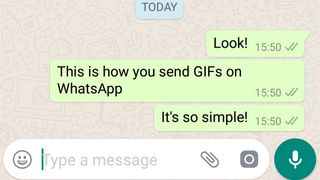 The wait for GIFs within WhatsApp was a long and static one, but in early 2017 the company finally started allowing users to send moving images to each other quickly and easily.

Even though you can now send GIFs to your friends and family on the messaging service, the feature remains a bit hidden. To be able to send them, you’ll need to be running a recent version of the WhatsApp software and if you read down below we’ll show you exactly how to do it.

It’s different for iOS and Android though, so be sure you’re reading the right section before you begin to test it out.

How to send GIFs in WhatsApp on Android

To send GIFs on Android you'll have to really dig deep, as it's not at all obvious how to do it. It's hidden behind a small button in a sub menu, so first off you'll want to press on the emoticon face in the bottom left corner of the screen.

Here you'll be greeted with the yellow emoji that you can send within WhatsApp, but in the center of the bottom of the screen there's a small button that reads GIF. On the far side of that is the stickers button too.

Press on the word GIF, and you'll be immediately greeted with a selection of the most popular GIFs at the moment. These are pulled through from a service called Tenor GIFs.

You can scroll down to cycle through all of the popular options, or if you press on the magnifying glass in the bottom left corner you can search for something specific.

Once your search has been entered, you can then scroll down to see all of the searches. Then just tap on the GIF you're interested in to view a full screen preview. From here you can add a message if you want, and tap the arrow to send it.

How to send GIFs in WhatsApp on iOS

It's not easy to find GIFs in WhatsApp on iOS either. You'll need to press the plus icon in the bottom left of the screen to open up multimedia options, then you'll be greeted with an option that reads 'photo and video library', which you should press.

In the bottom left again you'll see a magnifying glass icon with the word GIF next to it. Press here and you'll be able to search for whatever GIFs you want to send.

Then just tap on the GIF you wish to send, and you'll be able to push that out to your chat after a quick preview.

There's also a starred GIF option that will allow you to save your favorite GIFs or those you use regularly, so you won't always need to re-search for them each time you want to use them.

What if you have a different keyboard?

Some virtual keyboards offer an alternative way of sending GIFs alongside the method shown above.

For example, if you're using SwiftKey you can find GIFs within the keyboard when you hold down the enter button in the lower right hand corner.

You won't be able to search for GIFs if you use this method, but it does give you options such as 'Angry', 'Bored' and 'Happy' so you can quickly find a GIF to show the emotion you want to send.

How to send GIFs on WhatsApp Web

It's a similar process for sending GIFs in the WhatsApp web application too. When you're within the chat you want to send a GIF to, press on the smiley face in the bottom left corner.

Then you'll be greeted with lots of emoji, and next to that you'll find an option called GIF to the bottom right. You can see the top trending GIFs right away, or there are some popular topics running along the top to choose from. If those don't suit, there's a search bar just below.

Press on the GIF you want to send and you'll be given a quick preview and the option to add your own message before you send it along.