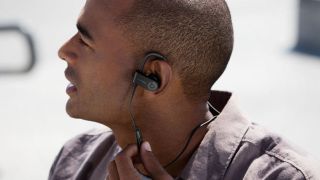 A Beats Powerbeats 4 release date could be imminent, based on an icon found within the latest version of iOS 13 – and judging from their looks, they could make ideal running headphones.

The icon, which was discovered by MacRumors, gives us a glimpse of what the new Apple earbuds will look like – and it appears that the company has taken inspiration from the true wireless Powerbeats Pro when designing the new earbuds.

As you can see in the image below, the Powerbeats 4 will sport a more curved ear hook than their predecessors, the Powerbeats 3; however, Apple hasn’t cut the cord completely between the two earbuds, opting to keep the popular neckbuds design seen in previous Powerbeats models.

That curved ear hook is one reason we awarded the Powerbeats Pro four out five stars in our review, contributing to an immaculate fit that makes them ideal running headphones.

It’s not the first time that digging into iOS 13 has revealed information about the new Beats headphones. In December, 9to5Mac, found strings (sequences of characters) within the newly released iOS 13.3 code that show the Powerbeats 4 will come with 'Hey Siri' support.

This is a feature found in Apple headphones that contain the H1 chip, including the 2019 AirPods, the new AirPods Pro, and the Beats PowerBeats Pro true wireless earbuds.

As well as allowing you to summon Siri with your voice alone, the H1 chip provides Apple earbuds with lightning-fast connectivity and better battery life than the original 2016 AirPods.

It’s worth nothing that he existence of the Powerbeats 4 wireless earbuds hasn't been confirmed by Beats or Apple, let alone their use of the H1 chip – however, support for the 'Hey Siri' trigger phrase makes it likely that the Powerbeats wireless in-ears will be upgraded from the W1 headphone chip to the H1 chip.