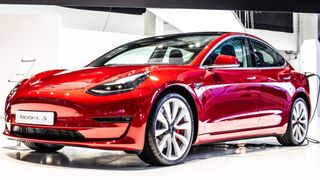 Elon Musk has shared a video via Twitter of a Tesla car ‘talking’ to pedestrians, claiming that the feature will be making its way to the range of electric cars ‘soon’.

In the tweet, Musk states that “Telsas will soon talk to people if you want”, and just to make sure we didn’t doubt the veracity of the embedded video, he also claimed that “this is real”.

The video is short, but shows a Tesla Model 3 driving past with a speech recording playing externally – ”Well don’t just stand there staring, hop in”. It's unclear at this point if the feature will use AI in order to actually interact with pedestrians or if it's purely an audio player.

Teslas will soon talk to people if you want. This is real. pic.twitter.com/8AJdERX5qaJanuary 12, 2020

One Twitter user asked if the feature could be added to Sentry Mode – an automated video surveillance security measure that Tesla vehicles employ – and Musk responded with: “For sure!! This will make for some epic robber confusion”.

As far as usefulness is concerned, the benefits of such a feature aren’t immediately clear. It’s possible that Tesla owners driving for ride-sharing services like Uber and Ola could use the feature to hail down their customer, but this is a bit of a stretch.

On the other hand, this could be seen as rather problematic, especially if the speech isn’t restricted to certain phrases and can be customized by the user – nothing will sooner cause issues than a car with its windows up harassing passers-by.