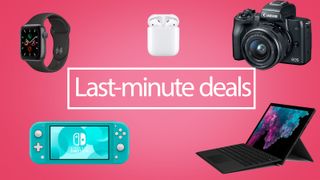 There are new last-minute deals for 2019, and enough of them that you can consider yourself officially saved. Major US retailers still have major sales going on this week, including Walmart, Amazon, Best Buy and Target.

This list of the best last-minute deals before Christmas (and, key, all shipping in time for December 25), means you will have something to gift for the holidays. And you won't have to pay through the nose for the ideal gift ideas after all.

What's on sale? The new Apple Watch 5 has a modest but meaningful discount attached to it, there's a Nintendo Switch bundle that offers a better value than normal, and all of Amazon's Echo smart speakers remain price slashed.

Quickly scour through our updated best last-minute Christmas deals list while they are in stock, because while you missed Black Friday and Cyber Monday, there's still a chance to get the gifts you want and save money while you do it.

🤐 SECRET DEAL: iPad Pro 11: just $649.99 at Best Buy
This secret deal is still on – as long as you're logged into a free My Best Buy members account, you can see it for $150 off the normal price. Everyone logged out sees the much higher $799 price.View Deal

Apple AirPods (2019): $139.99 at Amazon
These are the newer non-Pro AirPods with a non-wirelessly charging case, and today's last-minute discount offers a  savings of $20. That's a rare Apple deal - and we don't see it getting cheaper. And no, the AirPods Pro remain $249.99 everywhere we've checked.View Deal

MyHeritage DNA Test Kit: $49 at Amazon
Most DNA testing kits have gone up in price, however, this last-minute deal is still just $50 through Amazon. It lets you discover your ancestry and offers a detailed ethnicity breakdown from 42 regions.
View Deal

Amazon Echo Dot 3rd Gen: $24.99 at Amazon
This is our favorite Amazon device because it puts Alexa in your home for a fraction of the price of other smart speakers. It sounds good for such a small speaker, too.View Deal

Jabra Elite 65t: $99.99 at Best Buy
The price has been all over the place on these Jabra earbuds that want to rival Apple's AirPods. It's now back down to $99, giving you a $70 break off the MSRP if you grab this last-minute deal quickly.
View Deal

Apple Watch 5 GPS-only 44mm $404 on B&H
This is the Apple Watch 5 we suggest to most people, as it's larger (but not too big), meaning more battery life and larger touch points. It's a modest $25 off, but what do you expect from a last-minute Apple deal when it's so new to begin with.View Deal

Apple Watch 5 GPS + Cellular $479 on B&H
The cullar version of the Apple Watch 5 is also on sale, meaning you can sometimes ditch your iPhone thanks to its truly wireless capabilities. And saving $20 isn't too bad either.View Deal

Fitbit Versa Special Edition: $119.95 at Best Buy
Sure, Fitbit just got bought by Google, but it's still at the top of our fitness tracker list. Saving a bunch of money off the last-gen Fitbit Verse makes for a great last-minute Christmas deal.View Deal

Microsoft Surface Pro 6: $771 at Amazon
We can recommend the Surface Pro 6 (we reviewed it), and this config offers an Intel Core i5 processor, 8GB of RAM and 256GB of storage. It's a 2-in-1 that's much cheaper ahead of Christmas.View Deal

HP Spectre Folio 2-in-1: $899 at Best Buy
This HP 2-in-1 takes things up a notch with an Intel Core i7 processor with 8GB or RAM. It's just $899, which is cheaper than we saw it toward the end of Cyber Monday.View Deal

Acer Spin 11 2-in-1 Chromebook: $279 at Best Buy
The Acer Spin 11 is a handy 2-in-1 with the ability to flip over and function as a tablet. It has an 11.6-inch touchscreen display, a built-in keyboard, and runs on Chrome OS.
View Deal

Insignia 8-quart pressure cooker: $34.99 at Best Buy
This pressure cooker just got incredibly affordable from Best Buy's own brand after this price cut. It can fit up to eight quarts of food, and has 12 preset cooking functions to simply the cooking process.
View Deal

Sony Alpha a6000 Mirrorless Camera: $498 on Amazon
If you need a new camera, check out this Sony Alpha a6000 deal that cuts 38% - or $300 - off Sony's mid-range mirrorless camera. This kit also comes with the 16-50mm lens that works in a number of conditions and is absolutely great for beginners.View Deal

Canon EOS M50 mirrorless camera: $579 at B&H Photo
This Canon camera is so good we bought it two weeks ago. It's still on sale for the very same price thanks to a last-minute deal. So, we recommend it – clearly. View Deal

GoPro Hero7 Black: $299 at Amazon
If you want something a bit more modern, check out the GoPro Hero 7 that just launched a year and a half ago. The newer version of the camera often sells for $329 on a normal deal day, so getting it for $299 today is a great steal.View Deal

Sceptre 50-inch 4K Ultra HD TV: $189 at Walmart
This is one of the most affordable 4K TV deals we've ever seen, with the 50-inch model for under $200. One way you're saving this much is by skipping smart TV features, so if you want to stream content easily, you'll want to pair it with an external device like a Chromecast, Fire TV, or Apple TV.
View Deal

Sharp 55-inch 4K Roku Smart TV: $299.99 at Best Buy
A fantastic price for a mid-size 5K TV, you can get the Sharp 55-inch smart TV on sale. The Sharp TV has the Roku experience built-in and features a sharp picture, HDR, and easy access to your favorite streaming content.
View Deal

Toshiba 65-inch Smart 4K Ultra HD Fire TV: $429.99 at Best Buy
This deal will go fast! Best Buy has a $170 price cut on the Toshiba 65-inch 4K TV. The big-screen TV has the Fire TV experience built-in so you can stream from apps like Netflix, Hulu, Amazon Video, and more.
View Deal

LG 32-inch LED HDTV: $99.99 at Best Buy
A fantastic budget option, you can get the LG 32-inch LED TV on sale for just $80 at Best Buy. While the HD TV lacks smart capabilities, it does include HDMI and USB ports which allows you to connect a wide variety of devices.
View Deal

LG C9 OLED (55OLEDC9): $1,496.99 at Amazon
The LG C9 OLED is TechRadar's favorite TV of the year. It offers beautiful black levels, great upscaling and superb colors in addition to one of the world's best smart TV platforms, webOS. Usually this TV sells for well over $2,000 but this week it's on sale for $1,000 off the regular price.View Deal

Sony WH-1000XM3 noise-canceling headphones | $278 at Walmart
If you're looking for a Sony headphone deal that offers top of the range noise cancellation, portability, audio quality, and comfort, you'll want to look no further than this Sony WH-1000XM3 price cut. They weren't named TechRadar's top noise-canceling headphones two years in a row for nothing, and this deal from Walmart makes it just that little bit easier to treat your ears this Christmas.
View Deal

2-month Sling TV subscription | Free Amazon Fire TV Stick: $30-$50 at Sling
The Fire TV Stick from Amazon normally costs about $40, but Sling is offering it for free to new customers who pre-pay for two months of service. Sling's service costs just $15-$25 a month, so this is you getting a nice discount all around.
View Deal

Lego sets: Up to 40% off Lego at Amazon
Last-minute deals for toys often begin and end with a search for Log deals. That's why it's handy to have this link to Amazon, which is offering up to 40% off all of your Lego needs.View Deal

Samsung Galaxy S10e 128GB: $ $549 (with trade-in) on Samsung
The S10e is the cheapest Galaxy S10 version that's now even cheaper thanks to a last-minute deal that combines the value of your smartphone trade-in with a nice discount.View Deal

Star Wars Jedi: Fallen Order | PS4 | $59.99 at Walmart
If there's one that has increased in popularity, it's this one. Rise of the Skywalker is nearing release and this game is now $10 off for PS4. You're unlikely to find it cheaper before Christmas.View Deal

We'll continue updating this list of last-minute deals, as retailers like Walmart, Amazon, Best Buy and Target tend to shift around their discounts day-to-day. Even if you don't see the lowest price of the season, it beats paying the original MSRP.