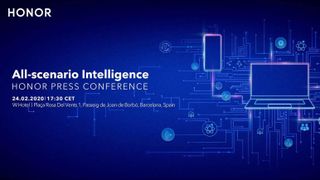 The Honor View 30 Pro has already been launched in China, but now we know when it will make its global debut after the phone manufacturer confirmed its plans for MWC 2020.

MWC is the massive annual phone convention held in Barcelona in February, and Honor has revealed that it will be launching the flagship View 30 Pro alongside the Honor 9X Pro, MagicBook 14 & 15 (which were shown off at CES 2020) and a pair of true wireless earphones.

None of these products are 'new', having all previously been launched in China, but MWC will be their first official global outing ahead of them going on sale outside Honor's homeland.

TechRadar will be reporting live from Barcelona to bring you all the latest on Honor's new products, along with all the new phone news, analysis and previews from MWC 2020.