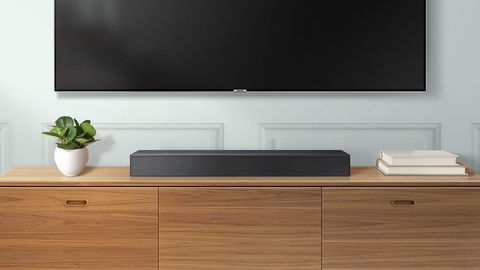 The Samsung HW-N400 is an attractive and well-made soundbar that proves an effective sonic upgrade for smaller TV screens, but the limited features, under-powered amplification and high price make it uncompetitive in a crowded market.

The Samsung HW-N400 is the company’s latest entry-level soundbar and forms part of its ‘all-in-one’ range - i.e. it’s a single unit, with no separate subwoofer. It’s designed for smaller screen sizes, with a diminutive cabinet and a simplified set of features.

Like its older siblings, the HW-K950 and HW-MS650, the N400 looks good on paper, but does it perform well enough to be included as part of the family?

Samsung’s HW-N400 uses an almost identical design to its other 2018 soundbars, essentially looking like a black rectangular block. The build quality is very good, and the single unit feels solid and nicely engineered. There is a metal grille along the front, a brushed metal finish to the top and plastic sides.

The N400 is designed to complement smaller TV screens, so it’s only 640mm wide, but at 71mm high it’s actually taller than the larger HW-N650. It should be able to fit in front of most TVs without blocking the screen, although if that is an issue the narrower cabinet is designed to easily fit on a shelf. Samsung also includes dedicated brackets for those who would rather wall mount the soundbar.

There’s a centrally-located LED display on the front of the N400, which provides simple feedback during operation. The display lights up when you use the controls, and provides basic information on the settings, volume and selected inputs. On the right hand side end panel, you’ll find some basic controls for selecting inputs, adjusting the volume and turning the soundbar on and off.

The included remote is actually quite good, and certainly better than the kind of controller often included with smaller soundbars. It’s ergonomically designed, fits comfortably in the hand, and includes all the buttons you’ll need. These have also been sensibly laid out, making set-up and operation as easy as possible.

All the connections are located in a recessed area at the bottom of the soundbar. Here you’ll find an HDMI input and an HDMI output with ARC (Audio Return Channel). There’s also a USB port, a 3.5mm auxiliary audio jack, an optical digital audio input, and a connector for the separate power supply.

The Samsung HW-N400 uses a 2.1-channel speaker configuration, with two forward-firing channels each composed of a mid-range driver and wide dispersion tweeter. This configuration means the soundbar doesn’t have a dedicated centre channel for dialogue.

The connectivity of the N400 looks reasonable for a soundbar at this price point, but on closer inspection a certain limitation become apparent. The included HDMI input and output are both version 1.4, which means the Samsung can’t pass 4K or HDR.

How big an issue that is will depend on your display and sources, but the best approach would be to connect everything to your TV and send the audio to the soundbar via ARC. That way you mitigate the problem of limited HDMI connections and their inability to pass 4K and HDR.

Since the N400 only supports two-channel Dolby Digital and DTS, using ARC won’t make any difference to the sound quality either.

The soundbar doesn’t support Samsung’s multiroom system, but it does include Bluetooth. So not only can you stream music from your smartphone or tablet, but you can also send wireless sound to the N400 from a compatible Samsung TV.

There are two sound modes; Standard and Surround. The Standard mode just uses the front two speakers and is best for music and certain TV programmes, while the Surround mode is designed for movies, TV dramas and games.

The Samsung HW-N400 is a perfectly competent soundbar that fulfils its role of improving the sonic performance of smaller TVs with ultra-slim panels.

However, given the excellent audio delivered by some of Samsung’s recent soundbars, it’s hard not to be slightly disappointed.

The smaller-sized cabinet obviously limits the width of the front soundstage, and although Samsung’s use of a wide-dispersion tweeter helps to a degree, it still feels decidedly narrow. That won’t be an issue in smaller rooms, but the N400 will certainly struggle in larger ones.

The soundbar also feels rather under-powered, and it’s interesting to note that Samsung doesn’t quote any amplification numbers in their marketing. We could turn the volume up to full and it still wasn’t that loud, although on the plus side the audio didn’t distort even at full volume.

There are no dedicated woofers built into the N400, just a small bass port at the rear left of the cabinet. As a result, the soundbar has very little in the way of low frequency presence, resulting in a sound that lacks any real bass impact. Coupled with the limited amplification, this does result in a fairly underwhelming performance overall.

When it came to regular TV programmes, the N400 was able to produce a pleasing audio experience. The music and sound effects of documentaries and less demanding TV shows were delivered well, and dialogue remained clear, despite the lack of a centre speaker.

Where the N400 began to struggle was with TV dramas and movies, both of which offer bigger and more immersive soundtracks. The soundbar could still handle music and dialogue without any issues, but the soundstage lacked width, effects were hard to place and bass was limited.

This feeling of constraint also applied to gaming, where the sense of immersion was also limited. Conversely the stereo nature of the N400 lends itself to two-channel content, and we did find that music was nicely rendered, even if the instruments lacked low frequency depth.

The Standard sound mode is the best choice for music, but we generally found it was also better suited to TV shows and movies. The included surround mode either had little effect on the audio, failing to create a greater sense of immersion, or it added an echoey presence that detracted from the overall experience.

Other soundbars to consider

A great rival for the Samsung HW-N400 is the Acoustic Energy AEGO Sound3ar. It uses a small but very well made cabinet that sounds bigger than it is, and thanks to a separate wired subwoofer it has plenty of bass, too. The remote is a bit rubbish, and there’s no HDMI support, but the AEGO Sound3ar offers a great performance at a cracking price.

Similarly priced to the N400, the Q Acoustics M3 also is another soundbar that’s worth considering. It doesn’t have a separate subwoofer, just like the N400, but unlike the Samsung it is capable of a wider soundstage, more power and deeper bass. The M3 only has an HDMI output, but given the limitations of the N400 in this area, that’s largely irrelevant.

Finally, the Polk Magnifi Mini soundbar is another great choice that's close in price to the N400. As the name suggests the Mini uses a small cabinet, but once again it's capable of producing a bigger soundstage than you’d expect. It also has a separate wireless subwoofer for deeper bass, while an HDMI output and a well designed remote round out a very nice package.

The Samsung HW-N400 feels rather basic, even for an entry-level soundbar. It has limited features, and lacks a separate subwoofer. More importantly, it’s underwhelming in terms of its performance. This is surprising, because recent models from Samsung have really impressed in terms of their sound quality.

Sadly the N400 has a limited soundstage, is under-powered in terms of amplification and lacks bass impact. It can handle music and TV shows quite well, but struggles to offer an immersive experience with movies and games. Although the N400 can boost the sonic performance of smaller super-slim TVs, there are better alternatives.