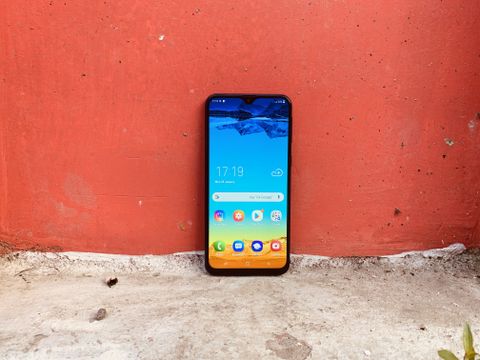 The Samsung Galaxy M20 is the company's retake at making value for money budget smartphone that suffices everyone's need. It ticks all the right boxes and offers everything you expect from a Rs 12,990 phone. But, the camera still has some room for improvement.

In the last quarter of 2018, Samsung dropped hints at its youth-centric approach with the release of Galaxy A7 and A9. Moving ahead on its "made for millennials" route, the giant has launched two new smartphones under its freshly introduced M-series - Galaxy M10 and M20.

Out of the two handsets, the M20 is a slightly better proposition with more features and better internals. For those unaware, the Galaxy M20 is posed against the budget handsets from Redmi and similar in India. It's a sub 15K phone that's said to replace the On-series handsets from the company.

Undeniably, Samsung's intent of making it a complete handset is visible on paper, but does it work the same way in real life usage? We have been using the Galaxy M20 from a week before the launch and testing it to see if it matches up to the hype that's been around the phone from a while.

As part of a launch offer by Jio, buyers of new Galaxy M20 will be entitled to double-data offer on Jio 4G.

Face up, the Galaxy M20 looks nearly identical to recently launched budget phones like Honor 10 Lite and Realme U1 with a water drop notch and thin bezels. That said, the phone brings along a completely new, but very basic design from Samsung this time. It's nowhere close to the J-series or the On series handsets that we've seen in the past.

The phone gets a polycarbonate body which undoubtedly feels good to hold. The finish is glossy and smooth to touch, and it does not imitate glass like most phones in its range. It is curved on all sides, making it fit in your hand perfectly. It has an oval fingerprint sensor, placed in the center back, which is easy to reach.

The Galaxy M20 is 180 grams as it packs a 5000mAh battery, but that doesn't make the body thick. We would say it's not the best design from Samsung or in its own league, but it's practical and one of the few phones that fit pleasingly well in hand.

Samsung is not going for the most premium looks here, and it doesn't need to either. The material and finish are impressive, it fits superbly well in hand, doesn't catch fingerprint, isn't prone to cracking and slides into pockets like water. After all, this, if it doesn't imitate a premium phone, it's ok.

The left side of the phone has a SIM card tray and the volume rocker is on the right, while the bottom has a USB Type-C port, a speaker grill and audio jack.

The display of the Galaxy M20 is a 6.3-inch FHD+ (2340 x 1080p) PLS TFT panel. PLS (Plane Line Switching) is Samsung's proprietary display design which is similar to IPS (In-Plane Switching) technology. If you're surprised to see the term TFT, it's just the terminology that sounds dated, but Samsung has worked on the PLS technology and it's visible on this device.

The display has rich colours, impressive viewing angles and outdoor visibility. It's one of those displays that catch your eye the moment you turn on the phone for the first time. It's adequately sharp and quite bright. However, if you're nitpicking and comparing it to the AMOLED panels on J-series phones by Samsung, then, of course, you won't get the deep blacks and highly saturated colors.

As a standalone display, the Galaxy M20 has a good one. It is at par with what the competition is offering.

Next Page What's it like to use?
TECH DEALS, PRIZES AND LATEST NEWS